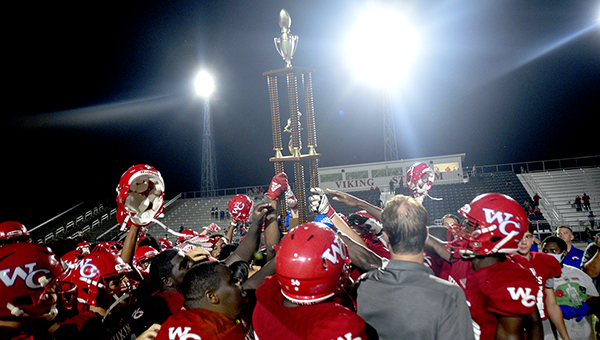 Warren Central’s reward for enduring three months of uncertainty, daily COVID-19 checks, and the blistering summer heat was a pair of championship celebrations in front of a sellout crowd of dozens of fans.

Kentrick Thompson ran for 125 yards and a touchdown in his first start as the Vikings’ quarterback, Timothy Thompson added another rushing touchdown, and Warren Central pulled away in the second half to beat Vicksburg High 17-0 in the season opener for both teams.

The game served as both the Red Carpet Bowl and the 40th edition of the River City Classic rivalry game between Warren Central and Vicksburg — as well as the end of a long road to a season that has been in doubt because of the threat of the COVID-19 virus. None of it was lost on the Vikings.

“It was good to get back out here. We missed our crowd, for sure, but I am proud for these guys. I told them going out, you’re going to have the opportunity to win two trophies the first game back from all this mess. So I’m very glad we were able to come out on top,” Warren Central coach Josh Morgan said. “I thought Vicksburg played very hard and did a good job. I’m proud of our kids and our effort. This has not just been tonight. This has been three months of work. A lot goes into this, and I’m happy for our kids.”

Vicksburg managed only 69 yards of total offense — all of it rushing — and five first downs in its debut under new head coach Todd McDaniel. The Gators lost for the ninth consecutive time to their crosstown rival, and were held to seven points or less for the seventh time in that streak.

Despite the struggles, McDaniel said he saw some positives from his team that they can take into a Week 2 road trip to Biloxi. In particular, McDaniel was pleased with a defense that held Warren Central in check for most of the night and the overall play of quarterback Laurence Sullivan.

Sullivan, normally a receiver, filled in for injured starter Sha’Kori Regan and ran for 48 yards on 13 carries.

“What I saw was a second-string quarterback come in and lead the team. We did not turn the ball over one time. My defense played outstanding. My defense played good enough for us to win the football game,” McDaniel said. “Hat’s off to Warren Central. Their defensive line played really well. We had creases here and there, but their defense was a little more physical than our offense and they were able to win the game. Our future is bright for Vicksburg football. This is not the same Vicksburg High people are used to seeing.”

The first half was either a defensive slugfest or an offensive abomination, depending on whether you’re an optimist or a pessimist. The two teams combined for 111 yards of total offense and six first downs, and the only points came on a 20-yard field goal by Warren Central’s Josh Griffin on the final play.

WC finally put together a drive on its second possession of the third quarter to give it some separation.

Kentrick Thompson carried the ball four consecutive times, for gains of 24, 11, 13 and 11 yards. The last went into the end zone for the game’s first touchdown, and Griffin’s PAT gave the Vikings a 10-0 lead with 4:23 to go.

“It felt real good. Everything was flowing. We just had to score to get momentum, especially in a game like this. The defense was standing up, so it was about time for us to score,” Kentrick Thompson said.

Vicksburg turned the ball over on downs at midfield on its next possession, and Warren Central went on a seven-play drive that put the game out of reach. Timothy Thompson finished it off with a 5-yard TD run that made it 17-0 with 9:14 left in the game.
Warren Central finished with 200 rushing yards in the game.

“The second half, I thought we were better. Our O-Line, for the most part, did a pretty good job, especially in the second half. It really came down to calming down and playing football,” Morgan said. “Our guys got to where they were staying on their blocks and producing big holes up front. Eventually, we were able to do what we needed to do up front in order to get some points on the board.”

Warren Central’s defense controlled things down the stretch, just like it did for most of the night. It only allowed one first down on the Gators’ last two possessions, neither of which advanced beyond the 31-yard line.

Defensive back Jaylin Thompson, who broke up two passes, said last week’s 13-0 loss to Holmes County Central in a two-quarter preseason scrimmage served as a wake up call for he and his teammates.

During its recent run of success, Porter’s Chapel Academy has unveiled a different offensive weapon each week. On Friday night,... read more