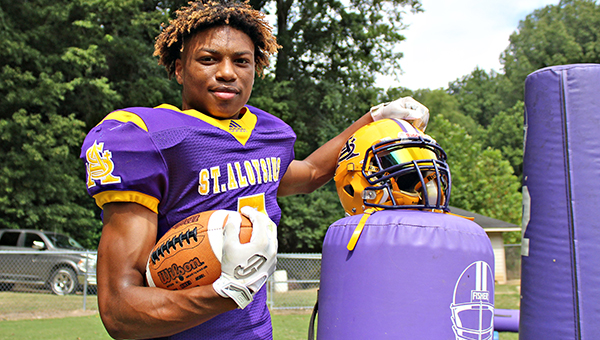 St. Aloysius running back and defensive back Brennan Williams.

Playmakers 2020: St. Al’s Brennan Williams is about more than speed

In football, the term “track guy” can often be used as an insult. It refers to a player that is incredibly fast, but not very tough or skillful.

Brennan Williams, a senior running back and defensive back for St. Aloysius, would probably laugh at that description. He’s definitely a track guy, having collected several state championships and a handful of medals at the MAIS state track meet in in 2018 and 2019. Rather than making him soft, it has provided the base of his toughness for football.

Among the offseason workouts Williams did while training with St. Al track coach Michael Fields was running a 400-meter long hill in Hinds County “over and over.” That kind of training inspired a strong work ethic, as well as physical fitness, and made him one of the Flashes’ leaders.

“Every day, Monday through Saturday, (Fields) had us out there running. Even during the pandemic, he had us out at his house running hills and doing everything,” Williams said. “I’m glad Coach Fields came through and helped me out. I was really good in middle school, but he came through and helped me work harder. He brought me to a different level.”

To this point in his high school career, Williams has made his mark more in track than in football. He won the Class 3A championship in the 400 meters and 110 meter hurdles at the 2019 MAIS state meet, and was the 2019 Vicksburg Post boys track Athlete of the Year.

In football, he’s been on St. Al’s varsity roster for two years already and is entering his second as a starter. He had 49 tackles and one interception as a defensive back in 2019, and also played receiver. So far this season he has two interceptions in two games.

He acknowledged that he’s flown under the radar so far, but is aiming to change that in 2020.

“People out here (at St. Al) do, and a lot of my friends in Hinds County know me, but as far as Warren County, not yet,” Williams said.

St. Al coach Stacy Sizemore is more than happy to give Williams the opportunity to make a name for himself. Sizemore gushes when talking about Williams’ speed and work ethic. He says it’s the perfect combination for a big-time playmaker.

“It’s a huge asset to have a kid that can run like that,” Sizemore said. “That gives you so many other opportunities. He’s a kid that you want to try and get the ball into his hands, because every time he touches it he can go the distance. He has that kind of speed and ability.”

Sizemore’s plan is to move Williams from receiver to running back on offense. Williams ran for 306 yards and scored three touchdowns last season, but most of his 42 carries came on jet sweeps and quarterback runs from the wildcat formation. This season, he’ll be used more as a traditional running back and get a much bigger workload. He last played running back in eighth grade.

Williams, who is only 5-foot-9 and 160 pounds, said the hardest part will be playing both offense and defense, and not the increased pounding he’ll take from being hit 25 times a game rather than 10 or 15.

“I feel like it’s not a hard move, because nobody is going to catch me. I feel like I’m fast enough,” Williams said. “The hardest part will probably be just being in shape. As far as DB, it’s the easiest to remember as far as what to do, but it’s the hardest position to play when you’re covering somebody.”

That Williams eagerly took on his new assignment without complaint, Sizemore said, shows what kind of character the player has. Williams has a 3.9 grade point average and scored a 21 on the ACT. He hopes to earn a track scholarship from Hinds Community College’s nationally-ranked program, or an academic scholarship if that doesn’t work out.

“Speed. Speed, athleticism, and a great attitude. He laughs and jokes when he wants to, and then when he needs to get serious he gets serious. He has the ability to handle that and is very mature,” Sizemore said, rattling off Williams’ attributes. “For someone as talented as him, he has a work ethic about him. That’s going to carry him even further.”

Williams added he’s ready to take on not just more of a physical role at running back, but a leadership role in the locker room.

“I’ve got to be more vocal and help my teammates learn what they need to do if they need help. And I’ve got to play on the offensive and defensive side this year, so I’ve got to work a lot harder,” Williams said. “I have to make sure I’m in shape, so hopefully I’ve got a handle on that.”

On Saturday, DeMichael Harris’ future in the NFL was in jeopardy. On Sunday, he got a second chance. Harris, a... read more