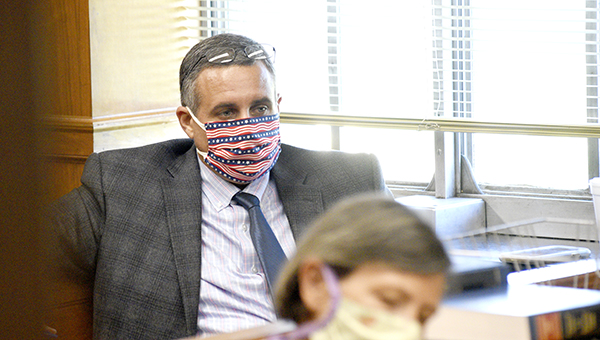 Warren County Supervisor literally begins the fight of his life

For the past six months, Ed Herring just didn’t feel well. There was the occasional shortness of breath and he was tired.

Over the past three months, the problems got worse, but it was last weekend while helping in his role with AT&T in the hurricane recovery effort in Lake Charles, La., when the pain in his chest got worse and lasted longer, that Herring decided to drive home and seek medical attention.

There were tests, consults and a CT scan that led to the discovery of a mass in his chest. The mass was located between his heart and lungs and, Herring said, is the size of his heart.

But, it was not until Friday, when the results of a biopsy of that mass were revealed, that gave Herring and his family the diagnosis of what he was fighting was more than shortness of breath and chest pains; he’s fighting cancer.

Herring said he was told Friday he had been diagnosed with Hodgkin lymphoma, a cancer of the lymphatic system.

He said even though he had expected bad news, hearing the diagnosis left him speechless.

“Honestly, they had just let my son (Reece) in the ER room, and for the first time in my life, I was speechless,” Herring said. “Of course, you don’t want to show any kind of emotion. I wanted to keep him strong.”

Herring said even with the diagnosis he was calm about the path that was now set before him.

“Surprisingly, it had not really upset me and I guess that is kind of odd considering what we are about to go through,” he said Saturday, still at Merit Health River Region. “I guess it is just the peace in knowing that I’m going to fight the hell out of it. No matter how bad it hurts, we are going to beat it.”

It is that “we,” too, that gives Herring confidence in the fight that is quite literally a fight for his life. But the hardest part was letting his family know.

“It is a struggle. I told one of the administrators here at the hospital, they really ought to rethink the visitation process, because being told you have cancer and then being rolled up into a hospital room and then letting your family know you have cancer by text kind of sucks,” he said. “But it is what it is.”

In-person access to patients by family members has been significantly limited during Herring’s stay due to the ongoing guidelines at River Region in response to the COVID-19 pandemic. That said, he has remained in contact with friends and family by phone and text and even has a group text with his older two children, his mother and others.

The next step begins Monday when Herring meets with an oncologist to determine what stage the cancer is in, to learn if it has spread to any other parts of his body, and to review the beginnings of a treatment plan. As of right now, he said, the plan does not involve surgery, and will likely focus on radiation and chemotherapy treatments.

According to the American Cancer Society, Hodgkin lymphoma most often spreads through the lymph vessels from lymph node to lymph node. Rarely, late in the disease, it can invade the bloodstream and spread to other parts of the body, such as the liver, lungs, and/or bone marrow.

But Herring is confident and positive about his chances, not because of what he has been told by his doctors, but because of things much stronger.

“Family and faith. Knowing that I have the best support network,” he said. “You couldn’t buy what I have.”

Herring not only has a career with AT&T, and is a father to three, he has served nine months into his first term representing District 1 on the Warren County Board of Supervisors. That job alone brings with it a tremendous responsibility to his constituents, a responsibility that is being helped by his fellow supervisors.

He said other supervisors have offered to chip in and help as he begins his fight against cancer, but Herring also said being a public official just may give him the chance, the spotlight, to help others.

“My first thought was ‘Oh my gosh, I am not going to be able to do everything I am supposed to do for everybody every minute.’ I kind of got over that and realized that I will still be able to function,” he said. “We have got to figure out where this takes us, the next plan, the next step, what it does to hinder my daily abilities and then go from there.

“I also realized, I am in my middle 40s. If one of y’all felt like this I would say ‘Go get checked,'” he said. “I fought it and now this damn thing in my chest is huge. I hope my experience can in someway make somebody, who has been putting off a doctor visit, say ‘let me go get that checked.'”

Two men accused of killing a third man at the Days Inn, 90 Warrenton Road have been indicted for murder.... read more