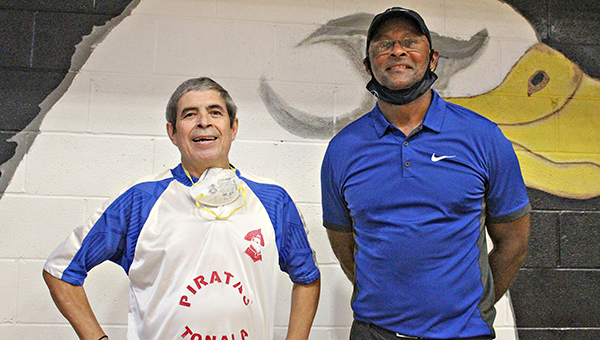 Carlos Lee simply missed coaching soccer after nearly a decade away from the sport. Casey Fisher, a Southern Miss basketball legend, was looking for a new challenge as he approached the next phase of his life.

Lee and Fisher are coming at their new jobs from slightly different angles, but are facing similar challenges as they take over as the head soccer and girls’ basketball coaches, respectively, at Porter’s Chapel Academy.

“I’m just thrilled to be here and get my feet back in it,” Lee said. “It’s an experience, but nothing I haven’t done before. I’m tickled to death to help them out.”

Lee has been a longtime fixture in Vicksburg’s soccer scene. He has worked in the Vicksburg Soccer Organization’s youth league, and was a coach at both St. Aloysius and Porter’s Chapel previously before taking a nearly decade-long hiatus to focus on his job as a labor union organizer.

Now 62 and vibrant as ever, Lee said it was time to get back in the game.

“I missed it so much. I’ve been on the road working the last eight or nine years,” Lee said. “I’ve got a granddaughter, a grandson, and I’m looking for something to do here.”

PCA’s soccer program is co-ed, and since its formation in the mid-2000s has often struggled to be competitive playing in an all-boys league in the Mid-South Association of Independent Schools. Lee was not deterred by that history. A lack of experienced players regardless of gender, he said, was a bigger obstacle to success.

“They have a challenge because of the number of athletes. But I believe the future is bright,” Lee said. “There are some girls that are awesome. Up to a certain age, they can be as good as the boys. Whoever is good, I want to build a team around them.”

The program Fisher is inheriting is more established, but still in need of a good rebuild. PCA’s girls’ basketball team finished 7-15 last season and has only been past the district tournament round of the MAIS postseason once since 2006.

Fisher said he likes what he’s seen from his players from an attitude perspective. Since taking the job he’s observed many of the players during softball season — PCA’s softball coach, Chandler Ellis, will be Fisher’s assistant for basketball — and feels there is raw material to work with.

“I’ve watched them in softball, and they’ve got a lot of heart. If you’ve got heart and hustle, that’s all you can ask of your players,” Fisher said. “With a little heart, a little hustle, and a few breaks here and there, hopefully you’ll win some games. They’re young, so hopefully we can learn and move on and build a program.”

One of Fisher’s bigger challenges is translating his own considerable basketball talent into coaching skill. Fisher was the point guard for the Southern Miss team that won the NIT in 1987 and is the school’s all-time leader in career assists. He also ranks eighth on Southern Miss’ career scoring list, and is in the top 10 in several other categories.

His coaching experience, however, consists of a brief stint at a military high school in Italy more than 25 years ago, and some youth an AAU teams.

“The challenge is not expecting them to be you. When they get open, you know what to do before the ball even gets there. You have to coach the kids, and that’s why a lot of great players can play but they can’t coach,” Fisher said. “I have the unique situation of already being in that atmosphere with the military kids. You have to coach the level of talent that you have. You can’t get out of a kid what’s not in them.”

Although he has not coached at the high school level in years, Fisher said he was looking for a way to get back into basketball. The 54-year-old is the pastor of Greater Grove Street Missionary Baptist Church in Vicksburg and Greater Zion Missionary Baptist Church in Utica, and said his duties at both churches had eased to the point where he was able to look for another gig.

“Basketball, even though I don’t play it a lot, it’s my heart. My first love is basketball,” Fisher said. “I had an inkling I would coach at some point. My life has slowed down. My ministries that I pastor have leveled off. I’m at the point where I can take on something. And just the challenge of winning with the talent that you have.”

Having played in front of thousands of fans at the highest level of college basketball, and preached in front of hundreds on a Sunday morning, Fisher also joked that his second career has helped soothe some of the rough edges created by the first.

“I’ve calmed down. They won’t hear any curse words,” he said with a laugh.

Both careers, however, have prepared him for helping turn PCA’s basketball fortunes around.

“I played in front of 30,000 people. I played in front of some of the most hostile arenas. So the mental aspect, it prepares you for the journey,” Fisher said. “I know what it takes to win. It takes team effort, all the way down to the managers, coaches, statisticians, everybody has to be of one accord.”