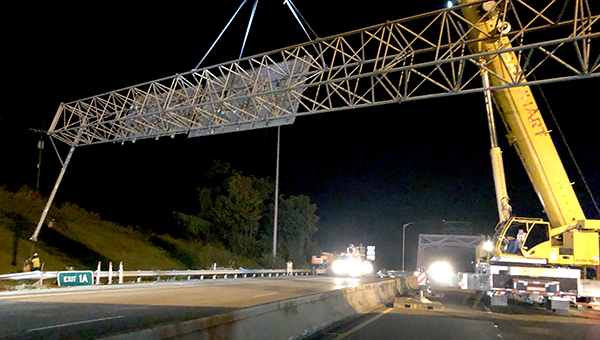 Crews with the Mississippi Department of Transportation work to remove a damaged sign and support structure from the Interstate 20 bridge eastbound Sunday night.

Officials closed the westbound lanes at around 3:45 p.m. as crews with the Mississippi Department of Transportation worked to remove a sign and support structure that was damaged early Sunday when an 18-wheeler traveling eastbound overturned and the structure.

Vicksburg Chief of Police Milton Moore said the westbound lanes were opened just after 10 p.m., while the eastbound lanes, which are closed on the Louisiana side of the bridge will remain closed for another 45 minutes to an hour. It is expected they will be reopened at around 11 p.m.

At around 10:30 a.m. Sunday, an 18-wheeler overturned as it was traveling eastbound on the Interstate 20 bridge. As it struck an unoccupied work truck parked near the foot of the bridge near the Washington Street overpass, the truck also caused significant damage to a sign and its support structure.

Since the accident, Louisiana officials have blocked access to the bridge to those traveling eastbound. At around 3:45 p.m., westbound traffic was blocked to allow equipment and crews to begin work on replacing and repairing the signs’ support structure.

The repair crews have been supported by the Vicksburg Police Department, the Warren County Sheriff’s Office and the Mississippi Highway Patrol.

Moore said the driver of the truck received minor injuries and was treated and released. The cause of the accident remains under investigation.

Warren County Martin Pace said earlier Sunday that his department had a motorcycle unit on patrol in the backed up westbound lanes of I-20 to respond to emergency or medical situations that may develop with motorists stuck along the interstate.

At its peak, the backed up westbound traffic reached nearly the Bovina exit, which is 11 miles from the bridge.

Photo gallery: MDOT begins repairs as I-20 bridge is shut down