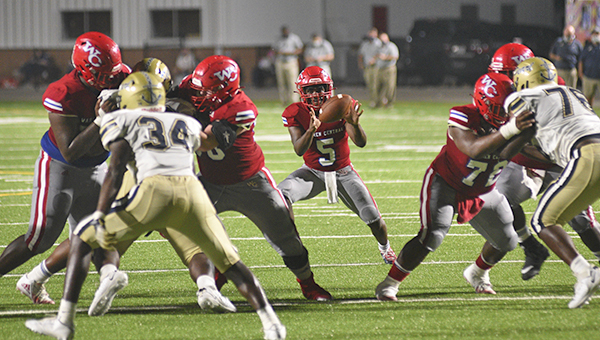 For the first time since 2016, Warren Central is entering the Region 2-6A schedule undefeated.
It’s a nice achievement, but it’s also meaningless.

The next eight weeks are what really matters, when six of the best teams in the MHSAA’s Class 6A ranks battle it out for four playoff spots. Three teams from Region 2-6A were ranked in the top five of this week’s Mississippi Associated Press Class 6A poll, and a fourth was just outside it.

The six Region 2-6A teams that are playing football this season — longtime also-rans Murrah and Greenville opted out because of COVID-19 concerns — are a combined 15-2 through three weeks. Four of them, including Warren Central and its opponent this week Germantown, are undefeated.

It’s the set up for a two-month battle royale in which two good teams will be tossed over the top rope, four advance to the main event of the Class 6A playoffs, and there is absolutely no margin for error.

“It’s definitely going to be challenging. I think it is every year. You’ve got six playoff teams that are fighting for four (spots),” Warren Central coach Josh Morgan said. “The way we’re going to approach it is one week at a time, and try to continue to get better. But you want to start that district off on the positive side. You definitely don’t want to have to climb uphill. With the tiebreakers and everything, every one is important.

“You’re playing in the best district in the state, in the highest qualification,” Morgan added. “So if you want to go to the dance you’re going to have to earn it.”

Warren Central is ranked No. 4 in the AP’s Class 6A poll after wins over Vicksburg, Brandon and Pearl. The latter came last week, 28-21 in overtime, and was the kind of test Morgan was hoping for even if it was at least partly the result of an uneven performance.

The Vikings missed one field goal and had another blocked, had an interception returned for a touchdown, and had to rally in the fourth quarter and overtime to win. The defense made several stops inside the red zone, however, and the offense once again made enough plays to win.

“We’ve been in different situations, and different experiences in different parts of the previous three games,” Morgan said. “Any time you have to gut out a win and find a way to win, that type of experience and continuing to respond, those types of games are so important. That experience is definitely going to be used down the road. It was good to see us find a way to win in a game where we sure didn’t make it easy on ourselves.”

Of all the teams in Region 2-6A, Germantown (3-0) might be the most dangerous simply because it is flying under the radar.

The Mavericks are unranked and a quiet 3-0 with wins over Canton, Tylertown and Terry, and have outscored their three opponents 138-38. They are rushing for 309 yards per game, with quarterback Colton Gardner (243 yards, four touchdowns) and running back Branson Robinson (426 yards, seven TDs) leading the way.

“Defensively, it’s hard to get a bead on them. They blitz a lot and bring a lot of pressure. A lot of movement up front,” Morgan said. “On offense, they’ve gone away from their traditional ground and pound Wing-T. They look different. Kind of the same plays, but from more of a shotgun, spread out type deal. They’re really utilizing a dual-threat quarterback that’s a really good football player and has been playing a long time. They’re a well-coached football team with a lot of good talent.”

Morgan added, however, that the Vikings are not at all looking past the Mavericks. With an open date next week, there’s no reason to. In a season where two region losses might be enough to knock a team out of the playoffs or well down the ladder, they can’t afford to.

If ever there was a time to take things one game at a time, Morgan said, this is it.

“We can’t allow ourselves to look at the big picture. We have to understand it. But all of our focus right now is on the next game. That’s the way we’re going to approach it, and leave no regrets this week. After this week, we’ll re-evaluate and go from there,” Morgan said. “It does us no good to talk or even think about what’s down the road. We just have to know this is an important game that’s going to have big-time implications toward the end of our year.”