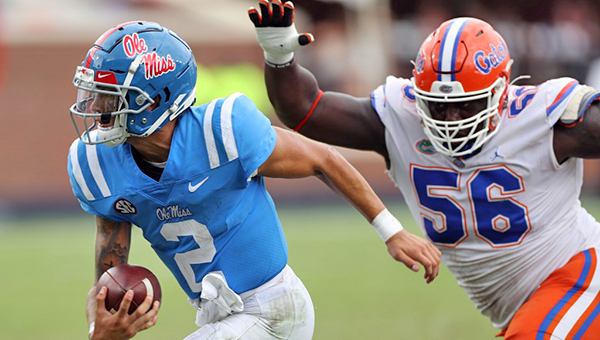 Trask directed four consecutive touchdown drives that spanned the second and third quarters to build a 41-14 lead for the Gators (1-0, 1-0 Southeastern Conference).

Trask modestly chose to deflect the attention to 6-foot-6, 240-pound Pitts, who consistently found seams in the Ole Miss secondary.

“He is a match-up nightmare for defenses,” Trask said. “He’s too big for cornerbacks and too fast for linebackers so it gives defenses lots of trouble and that’s what you like to see.”

After an unusual offseason, filled with uncertainty because of the COVID-19 pandemic, just playing was a victory.

“You know what? the question of are we playing next week, when can we play, how long is training camp, when is this ever going to happen, when are we ever going to get to a game?” said Mullen, who coached nine years at Mississippi State and went 5-4 against the Rebels. “We got to a game. It’s a great day for us and a great win.”

Kiffin, the former Tennessee and USC head coach who came to Ole Miss from Florida Atlantic, had the Rebels’ offense humming with Matt Corral at quarterback.

Corral completed 22 of 31 passes for 395 yards and three touchdowns passes, two to Dontario Drummond. Elijah Moore caught 10 passes for 227 yards, the second-best receiving yardage total in Ole Miss history and the most by any play against an SEC opponent.

But they couldn’t stop the Gators. Ole Miss (0-1) tied it at 14 midway through the second quarter before yielding to the Trask-led Florida outburst.

“We had a lot of chances to make plays to change the outcome,” Kiffin said. “When you play the No. 5 team in the nation, you can’t make mistakes like we did if you want to win. We’re 0-1 and we’ve got to go on the road and find a way to get to 1-1.”

The teams combined for 1,255 yards of total offense, including 642 by the Gators.

The Rebels featured a completely new coaching staff with scheme changes. Spring practice did not happen. An influx of newcomers and coronavirus testing protocols shuffled the depth charts. Expectations were cautiously optimistic for Kiffin’s home debut in front of an enthusiastic crowd of 16,010 and nearly 600 fan cutouts purchased at $55 apiece. The Rebels answered with an impressive offensive performance, but not a victory. They’ll try again next week on the road at No. 23 Kentucky.

“I don’t care about individual stats, I care about winning,” said Moore, who had a touchdown catch erased on a holding penalty. “We didn’t win, so it doesn’t matter.”

Warren Central running back Tre Hall ran for 119 yards and a touchdown on only five carries in a 23-10... read more