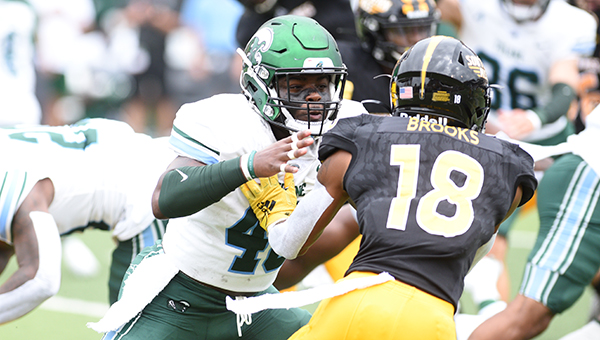 HATTIESBURG (AP) — For the second game in a row, Southern Miss blew a double-digit lead. The difference this time was that it was a distant memory by the time the game was over.

Carroll finished with a career-best 163 yards on 15 carries. Freshman Michael Pratt came off the bench and finished 8-of-18 passing for 142 yards and two touchdowns and added seven carries for 40 yards, including a 1-yard touchdown for Tulane (2-1).

“Any time a team rushes for over 400 yards, there is no excuse. Our whole game plan defensively was to make us beat them throwing the ball and we’ll shake their hand if they do that and we did not do that, not even close,” Southern Miss interim head coach Scotty Walden said. “So we really got to go back and reassess and really re-evaluate. You know they were 9-of-21 passing. I mean that’s who they are, a running team. You know and they did a great job doing it. They had very few schemes. I thought they executed at a high level, but to me, I know we’re better than that.”

After letting a 17-point lead slip away against Louisiana Tech two weeks ago, Southern Miss (0-3) got off to another fast start it could not sustain on Saturday.

Southern Miss jumped to a 14-0 lead fewer than five minutes into the game but Tyjae Spears scored on runs of 2 and 15 yards to tie it early in the second quarter. After Jack Abraham hit Naricuss Driver for a 61-yard touchdown to put the Golden Eagles back in front, Pratt hit Carroll to make it 21-all and then Merek Glover’s 41-yard field goal with 1:41 left in the first half gave Tulane the lead for good.

“The one thing I talked to the team about and this is something we’re going to have to mentally get over and really get over the hump with it. I felt it for two weeks. I didn’t feel it as much. I felt it a little in the (Louisiana) Tech game. But I felt it more today is when we have a lead, when we start to click and we start to go up on a football team, there’s kind of a sense of, ‘Hey, is this okay?’ And you know, we got to stop waiting around for validation on that,” Walden said. “And that’s why I just got done talking with the guys on it. It’s not about that. It’s about when we get a lead, when we get momentum. It’s got to be all gas and no breaks. And there’s no let-up.”

Abraham completed 23 of 38 passes for 299 yards and two touchdowns, with one interception for Southern Miss. He connected with Jason Brownlee for an 88-yard touchdown that made it 14-0 with 10:31 left in the first quarter.

Brownlee finished with three receptions for 110 yards and the one TD. Demarcus Jones, a former Warren Central star, caught a team-high 11 passes for 77 yards, and also had 11 rushing yards.

Keon Howard, a transfer from Southern Miss, started the game at quarterback for the Green Wave but was replaced by Pratt in the first quarter. Howard was 1-of-3 passing for zero yards.

Carroll scored on a 30-yard run with 41 seconds left in the first half before he raced untouched off left tackle for a 52-yard touchdown on the second play from scrimmage in the third quarter to make it 38-21.

The Green Wave finished with 572 total yards, including 430 rushing. The 66 points were the most Tulane has scored since beating Southern University 66-21 in the 2016 season opener.

Former Vicksburg High star Nick Anderson had eight tackles, including one tackle for loss, for Tulane.