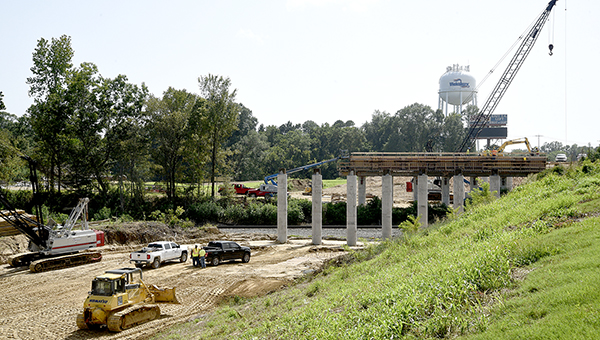 Crews continue the massive dirt work portion of the South Frontage Road extension project along eastbound Interstate 20 in September 2020. The project is on schedule to be completed by spring 2022. (Courtland Wells/The Vicksburg Post)

“The road extension is not only going to have a positive impact on us, but all of East Vicksburg is going to benefit from that,” said Steve Patrick, leasing and property manager for BRC Vicksburg, a subsidiary of Atlanta, Ga.-based Blue Ridge Capital which owns the property now known as Vicksburg Commons. “I think there is going to be a lot of growth in that corridor and hopefully a lot more development in that area.”

The contract for the South Frontage Road extension was awarded in September 2019, with work beginning in December.

Mississippi Department of Transportation spokesman Jace Ponder said the $17.8 million project, which is being built by Columbia-based T.L. Wallace Construction Co., is on schedule to be completed in the spring of 2023.

“The crews continue to perform dirt work on the approaches to the bridge and at the bridge site they are driving pilings,” Ponder said. People traveling eastbound on Interstate 20 can see the supports for the overpass crossing the Kansas City Gulf Railroad tracks that presently bisect South Frontage.

Blue Ridge Capital acquired the outlet mall property in January. Since then, Patrick said, the company had been marketing it to potential tenants that are presently not in Vicksburg and also to local businesses. At this time, however, he said no announcement of new tenants is expected.

Attracting local tenants, Patrick said, is a new approach for the property, which as an outlet mall always sought national tenants.

“We think there is a great opportunity there to market it to local tenants and restaurants,” he said, pointing out that Billy’s Restaurant in the property has remodeled and expanded.

When the property was strictly an outlet property, Patrick said, the restriction was there would be only one restaurant there.

“Now that we have changed ownership and changed the structure of the property we can open it up to the restaurants,” he said. “Something that doesn’t complete with Billy’s but we certainly would like to have two more restaurants on the property at some point in the future. We’re also talking with a number of non-retail clients.”

Also, he said, Blue Ridge plans to set aside 15 percent of the property’s overall square footage for entrepreneurs.

Patrick said company officials knew bringing the property back “was going to be something we were going to have to be working on for a while. No one could have predicted the pandemic coming and that put a lot of tenants on hold, but in these kinds of situations comes opportunity.

“We’re a small company; we focus on one property at a time,” he said. “The community sees this property as an asset and we want to bring it back to be an asset and bring jobs to Vicksburg and some sales tax revenue to Vicksburg.”

Patrick said some of the existing tenants — Claire’s, Hanes, Rocky Mountain Chocolate Factory and Billy’s — have renewed their leases.

He also said the company must remain patient as the South Frontage Road project continues.

“We’re very excited about the Frontage Road,” Patrick said. “We know we have to be patient because that’s not going to happen quickly, but we feel confident with the road construction being completed, with a little more normalcy in the world, we’ll be able to move forward with it. We believe the property and east Vicksburg will be successful.”

The Board of Mayor and Aldermen in April 2018 awarded a $1.576 million bid to relocate the utility lines along South Frontage Road to Hemphill Construction of Florence. The project was completed in June 2018.