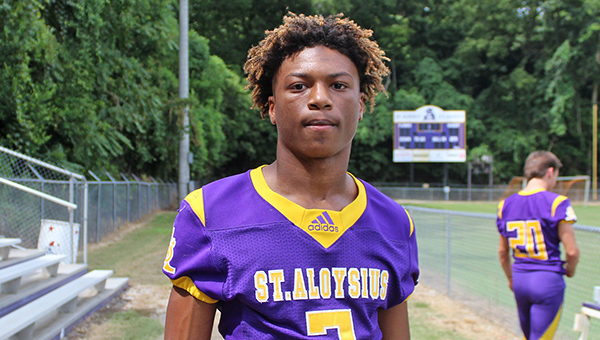 St. Aloysius running back Brennan Williams ran for 138 yards and three touchdowns in a 38-0 win over Silliman on Friday.

After a month wandering in the football desert, the St. Aloysius Flashes found a welcome oasis filled with touchdowns and victory.

Brennan Williams rushed for 138 yards and three touchdowns, and the Flashes had five takeaways on defense as they routed Silliman Institute 38-0 on Friday night.

It was St. Al’s third win of the season, but first on the field. Its other two victories were forfeits, and it had only scored 12 points and one touchdown in five games.

Amazingly, for all of its struggles, St. Al (3-4, 2-1 MAIS District 3-5A) put itself in a position to make the MAIS Class 5A playoffs with this victory, and could find itself in first place in the district if it can beat Adams County Christian on homecoming next week.

“We were executing on both sides of the ball. It was fun to watch. It was a lot of fun to see our kids and our coaches get excited,” said Stacy Sizemore, who earned his first win as St. Al’s head coach. “Our kids always play hard, and to see them executing what we do and finally see some success at what we’ve been trying to teach them all along was fun to see.”

Padre Gray and Tristan Wilbanks also scored rushing touchdowns for the Flashes (3-4, 2-1 MAIS District 3-5A), who had 203 rushing yards as a team.

“The kids came out and just executed. We came out and executed like we always do, we were just playing a team we could compete with,” Sizemore said. “It was just a good matchup for us.”

Neshoba Central pulls away from Vicksburg

There was no miraculous comeback for the Vicksburg Gators this time, no fantastic finish. Just a loss and, head coach... read more