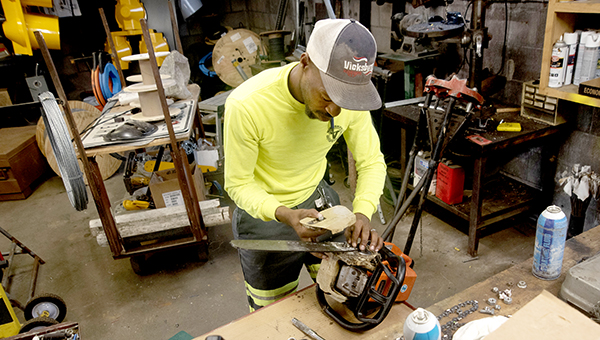 City of Vicksburg Traffic Department employee Sedrick Hall services a chainsaw Thursday as the department prepared its equipment to respond to the arrival of Hurricane Delta, which is expected late Friday into Saturday. (Courtland Wells/The Vicksburg Post)

Area emergency management officials are continuing their preparations in advance of Hurricane Delta’s arrival on the Louisiana Gulf coast Friday.

Delta is expected to make landfall about 7 p.m. Friday near Lake Charles, La., which was heavily damaged by Hurricane Laura in August. Hurricane warnings have been issued from High Island, Texas, to Morgan City, La.

Tropical storm warnings have been issued for an area east of the mouth of the Pearl River to Bay St. Louis, and as far north in western Mississippi as Claiborne County.

According to the 7 p.m. Thursday advisory on Delta, the storm is forecast to make landfall just east of Lake Charles and then move northeast through central Louisiana and western Mississippi. Tropical storm-force winds are forecast to reach the Vicksburg area around 8 p.m. Friday. Delta is forecast to continue across northern Mississippi before reaching Tennessee as a tropical depression.

Delta is expected to be west of Vicksburg as a tropical storm about 7 a.m. Saturday. According to the National Hurricane Center, Warren and Claiborne counties have a 60 to 70 percent chance of getting tropical-storm-force winds of from 39 to 74 mph.

“Because we’ve been advised we’re under a tropical storm warning, we’re in the process of starting to prepare,” Claiborne County Emergency Management Director Marvin Ratliff said. “If something happens, we’ll be ready.”

He said the county should have a shelter open Friday in Hermanville on Mississippi 18, adding, “We have sandbags available for those who need them.”

Warren County Emergency Management Director John Elfer said residents can expect 3.5 to 8 inches of rain from Delta, which he said is a fast-moving storm.

“It’s not a slow storm where you get that 10 or 15 inches over time,” he said. “They’ve (the National Weather Service) also put us at an elevated risk for high wind — 35 to 45 (mph) at least. Hopefully, by 1 o’clock Saturday afternoon, we’ll still have rain but we won’t have the tropical force winds if I had to guess.

“I’m anticipating trees, limbs, power lines down; that wouldn’t surprise me at all,” Elfer said. “We’ve had all that rain earlier this year. We’ve got some compromised trees, some compromised roadbed issues.”

Elfer said the county’s engineer and road department will be out checking roads. He said emergency management officials will be at the emergency operations center through the night on Friday and into Saturday.

While emergency management officials make their final preparations, city and county public works officials and road crews are readying their equipment to respond to storm-related problems.

W.L. Sanders, traffic supervisor for the city of Vicksburg, said preparations for Delta were underway at his department.

“I’ve got a guy making extra signal heads right now at the shop,” he said. “He’s making the extra signal heads in case any get knocked down we’ll have some spares. We’re going to be gassing up all of the vehicles and chainsaws, making sure the saws are ready to go.”

Sanders said street closure barricades are ready to go and loaded on a trailer.

“We’re on call 24/7, but usually when the storm comes up I’ll wind up hitting the road and I’ll be out in it and then I can call my guys out depending on what happens,” he said. “Hopefully, it won’t be as bad as they think, but we have to be ready just in case.”

“We’ve got a foreman on call 24/7 and we’ve got our equipment placed in different areas of the county where we can get to it and we have the crews that will be needed on standby,” Cain said. “We’re waiting to see what happens.”

It’s amazing the difference a decimal point can make. For as many as 1,500 residents of Warren County, that decimal... read more