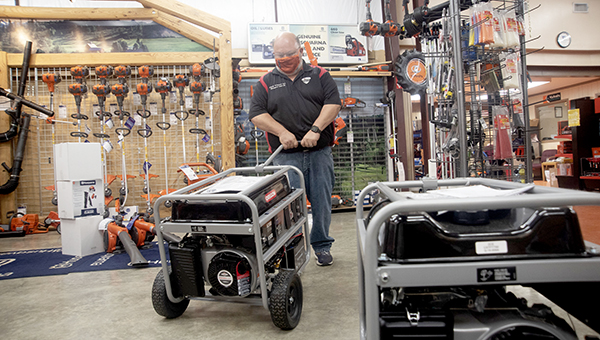 Hurricane Delta’s forecast pushes residents to stock up and prepare

It’s the not knowing, sometimes, that helps us get prepared and that is just what locals have been doing in anticipation of Hurricane Delta.

As of Thursday, Delta was a category 3 storm with winds of 115 mph, and its path includes Vicksburg.

While locals may not experience the worst of the hurricane, the forecasted high winds and heavy rains are still enough to cause downed trees, power outages and flooding in the River City.

Therefore, it makes sense to have a few staples laying around the house.

Todd Kurtz, who is the store director at Corner Market in Memorial Plaza, off the North Frontage Road, said he had not seen a rush of customers Thursday morning but expected them later in the day.

“It will probably be this afternoon before I will start seeing it,” Kurtz said.

The most sought after item his customers will be looking for is bottled water.

However, if weather conditions begin showing signs of worsening and people fear they may be without power for a stretch of time, Kurtz said customers load up on canned items, too.

Larry Ferguson, who is the store manager at Sullivan’s, located on Clay Street, concurred with Kurtz about customers always buying water when bad weather is in the forecast.

As of Thursday morning, Jason Morgan, owner of Morgan’s Bestway, 4306 Halls Ferry Road, like Kurtz, said he has not yet seen an increase in customers. When that time comes, Morgan said, buggies are filled with bread, milk and water.

“After Hurricane Katrina, everything was just wiped out,” Morgan said, “But since we haven’t had any major storms lately, I guess they are just waiting and watching.”

Needed items during a storm don’t just include groceries.

Cook Tractor parts manager Richard Carroll said portable generators are a sought-after commodity with the threat of severe weather. A rush to get ahead of Delta has brought brisk sales but short supply.

“I probably sold five or six generators (Thursday),” Carroll said. “People are getting ready. They are trying to be more prepared for this.”

Cook Tractor, Carroll said, had five generators left as of Thursday afternoon. Their popularity is due in part to people needing them to keep their freezers running.

“Freezers are the main thing, especially in the area we live in where everyone deer hunts and fishes,” he said, “So they put a lot of meat up.”

Also with the COVID- 19 pandemic, Carroll said, people stocked their freezers to account for any potential meat shortages and expected price increases.

“Freezers are the one thing they are going to keep charged because they don’t want to lose all that money,” he said.

Carroll was also quick to remind those who have a portable generator or those buying one that they are intended to run outside of the home. Portable generators with engines release carbon monoxide, which is odorless, invisible and very dangerous.