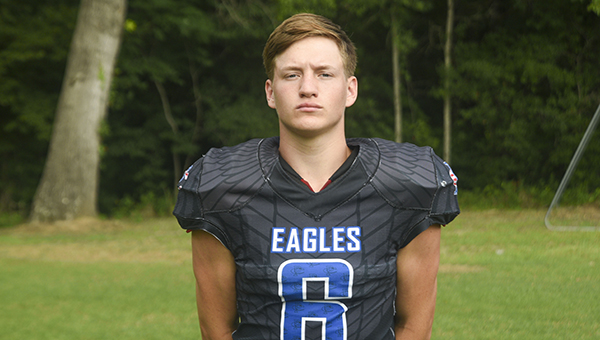 Porter’s Chapel Academy football player Gage Ashley had seven tackles and one sack on defense, and carried the ball seven times for 42 yards on offense, but the Eagles lost 59-0 to Greenville Christian on Friday.

While Hurricane Delta approached Vicksburg from the south on Friday, a different kind of hurricane blew in off the Delta from the north and swept away Porter’s Chapel Academy.

Greenville Christian scored on seven of its eight offensive possessions, added an interception return touchdown on defense, and smashed the Eagles 59-0 Friday night.

D.J. Smith threw three touchdown passes and ran for another score for Greenville Christian, while Marlon Palmer ran for two TDs and had one touchdown reception. Daylin Metcalf caught two touchdown passes. The only Saints’ possession that did not result in points was their last, when they took a knee to run out the clock.

The 59-point margin of defeat was the largest in the 47-year history of PCA’s football program. The previous record was 56 points, set twice last year in 56-0 losses to Greenville Christian and Greenville-St. Joseph.

“They were just good,” Porter’s Chapel coach Blake Purvis said. “They were big, they were athletic, they were fast and they were physical. It was what it was. They could cover so much ground that they were able to cover for any mistakes they made.”

After PCA went three-and-out on the game’s opening possession, Smith threw a 59-yard touchdown pass to Metcalf on the Saints’ first play from scrimmage. It was the first of four first-quarter touchdowns as the Saints quickly amassed a 30-0 lead by the end of the period.

Palmer turned a screen pass into an 80-yard touchdown, and a deflected pass was intercepted and returned 30 yards for another TD by linebacker Buster Willis to put the Saints ahead 44-0 with nine minutes left in the second quarter.

PCA had minus-33 yards of offense in the first quarter. It finished with just over 100 rushing yards for the game.

“We tried different things offensively. We thought we could have success,” Purvis said. “They were faster than us in all phases of the game and we couldn’t overcome that.”

Although the game quickly got out of hand and was never in doubt, PCA did start to move the ball in the second quarter. Ra’Darius Turner broke off a 27-yard run early in the quarter, and Tyler Washington had a 31-yard run to move the ball deep into Saints territory late.

Neither drive resulted in points, however. Daniel Llopis missed a long 46-yard field goal attempt after Turner’s run, and the Eagles turned it over on downs inside the 10-yard line following Washington’s run.

Gage Ashley led PCA’s offense with seven carries for 42 yards. He also had seven tackles and one sack on defense.

Purvis said having even the limited success the Eagles did was a bright spot heading into next week’s home game against Glenbrook Academy. PCA needs to win it to shore up its standing in the Class 3A playoff race.

“To have any success and not just go three-and-out every time, hopefully will give us some confidence,” Purvis said.

Hinds Community College pushed the defending national champion to the limit, but couldn’t get them over the edge. Deondre House... read more