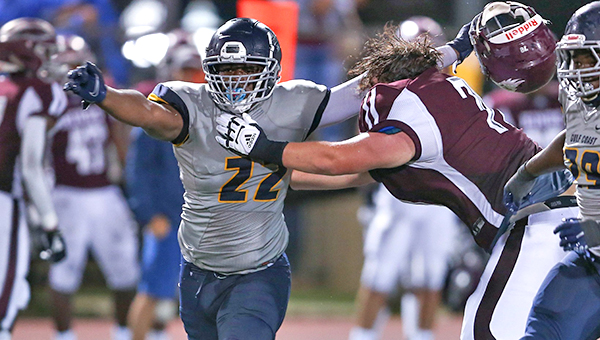 Hinds Community College pushed the defending national champion to the limit, but couldn’t get them over the edge.

Deondre House ran for 146 yards and three touchdowns, including the game-winner in overtime, as Mississippi Gulf Coast beat Hinds 31-24 on Thursday night.

“It was one of the toughest games we’ve played in,” said Gulf Coast linebacker Mike Smith, who returned an interception for a touchdown. “We knew the game was going to come down to the wire, and we knew as a team we had to pull it out.”

Smith’s 41-yard pick-six put the Bulldogs ahead 24-17 with 1:41 left in the fourth quarter, but was just the first act in a wild finish.

Hinds (0-1) drove down the field in the last 90 seconds for the tying touchdown. Kobe Dillon’s 2-yard run with 13 seconds remaining tied it at 24 and sent the game to overtime.
House scored on a 4-yard run on Gulf Coast’s possession, and then Jashon Baker ended the game with an interception on Hinds’ possession.

“It was a gut check, and I just could not be prouder of the fight to the very end,” Gulf Coast head coach Jack Wright said. “That’s’ the one thing that stands out right now. We never quit, we never laid down, and there were plenty of opportunities to do so. We never did, and that’s a very good feeling.”

Hinds quarterback BeSean McCray completed just 10 of 31 passes for 147 yards, with one touchdown and two interceptions. He also ran for 52 yards and a TD, and Dajon Richard had 102 rushing yards.

Former St. Aloysius star Connor Smith kicked a 24-yard field goal and was 3-for-3 on PATs.

Holman Edwards threw a touchdown pass and ran for another score for East Central. He completed 17 of 29 passes for 135 yards.

Jerry Johnson rushed for 93 yards for Southwest Mississippi, but the Bears only had 172 yards of total offense.

Drexlan Allen ran for 68 yards and a touchdown, and Paul Hargrave was 9-of-18 passing for 172 yards, with one touchdown and one interception for the Wolves. Bryce Lofton kicked two field goals.

Will Young had a 22-yard rushing touchdown for Pearl River (0-2), Stetson Moore caught a 17-yard TD pass, and Noah Mitchell returned an interception 35 yards for another score.

HATTIESBURG — Florida Atlantic’s football game at Southern Mississippi on Saturday has been postponed because of COVID-19 issues. The schools... read more