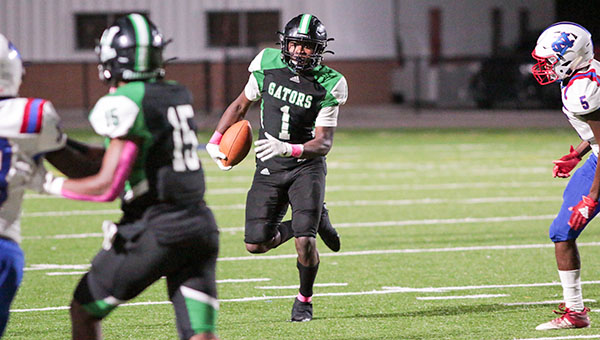 Vicksburg High’s Sha’Kori Regan (1) runs with the football against Neshoba Central. Regan has rushed for 533 yards and three touchdowns in four games since moving from quarterback to running back. (Walter Frazier/For The Vicksburg Post)

You’re in Four Down Territory. Each week, we’ll highlight four notes, nuggets, stats and trends from the weekend that was in Mississippi high school football, college football and the NFL.

1
Sha’Kori Regan was supposed to be Vicksburg High’s starting quarterback this season. He took most of the first team snaps in preseason practice and, after amassing nearly 2,000 yards of total offense and accounting for 20 touchdowns last season, was ready to emerge as a star.
Regan is indeed beginning to enjoy a breakout season, just not in the way anyone imagined.

The senior broke his left hand just before the season opener against Warren Central. Upon his return to the lineup he was moved to running back, and has rushed for 533 yards and three touchdowns in his last four games.

“Sha’Kori is a natural athlete. He’s a big, strong, physical guy. I told him just the other day, ‘What if you had really dedicated yourself to the weight room? You’ll probably be one of the best running backs in the state of Mississippi right now,’” Vicksburg head coach Todd McDaniel said. “He’s taking the bull by the horns and wrestling him to the ground.”

Regan had 127 yards in a Week 3 loss at Natchez, but had a real breakout game against Cleveland Central last Thursday. He carried the ball 32 times for 295 yards and two touchdowns, including a 2-yarder that tied the game at 21 with 19 seconds left. The Gators rallied from a 14-point deficit in the second half but lost 24-21 on a field goal as time expired.

The 295 yards were a career high for Regan — his previous best was 169 yards last season against Benton (La.) — and the most for a Vicksburg High player since Terrell Smith had 287 yards against South Delta in 2013. The single-game school record is 347 yards, by Caris London against Gentry in 1999.

McDaniel said as good a game as it was, it could have been a lot better.

“We had 295 yards in one night, but we still left 500 yards out there,” McDaniel said. “The offensive line did a great job of giving him creases, and he did a great job of seeing those creases. We still have a lot of work to do, but still, when opposing teams look at us we’re not a joke. They understand that they need to bring their A-game because we’re going to play from start to finish.”

2
Warren Central’s defense stood tall again in its 8-0 win over Madison Central on Thursday — it was the Vikings’ first shutout against the Jaguars since 1992 — but some of the biggest plays in the game were made by the special teams unit.

Josh Griffin and Brandon Gilliam each kicked a field goal, and five of the Vikings’ eight points were set up by punts downed inside the 10-yard line.

Midway through the third quarter, Riley Lampkin was called upon to execute a pooch punt from midfield. His kick was downed at the 2-yard line, and three plays later Tevin Bell intercepted a pass to set up Gilliam’s 21-yard field goal that gave WC a 6-0 lead.

Later, with less than two minutes left in the fourth quarter, the Vikings faced fourth-and-long near midfield. Griffin punted the ball only about 20 yards under heavy pressure, but was bumped by a Madison Central defender. The five-yard running into the kicker penalty did not result in a first down, but did give Griffin another chance.

He unleashed a 45-yard punt that was downed at the 7-yard line, and three plays later Laurence Madison sacked Vic Sutton in the end zone for a safety with 36 seconds to go.

Griffin punted four times in the game for an average of 53.8 yards, helping Warren Central to flip and control field position in a game dominated by defense. Warren Central and Madison Central combined for less than 400 yards of total offense.

“There’s a lot of people that are part of special teams, and it’s a way to impact the game,” Warren Central head coach Josh Morgan said afterward. “We used all three of our kickers tonight. We’ll use whatever we need to do to win. It’s just an unselfish football team.”

3
Ole Miss and No. 2 Alabama set several Southeastern Conference records on Saturday night, which left their offenses beaming with pride and the defenses covering their heads in shame.

The 111 points scored in Alabama’s 63-48 victory were the most ever in an SEC game that did not go to overtime. Auburn and Arkansas held the previous record of 108, set in 2010, for a game involving two SEC teams. Two non-conference games had more points.

The two teams also combined for 1,370 yards, the second-highest total in league history and the most in a game with two SEC teams. Only Troy and Tennessee (1,439 yards in 2012) combined for more.

The 647 yards Ole Miss put up were the most an Alabama defense has ever allowed, and its 48 points were the most the Crimson Tide has allowed against an unranked team in the AP poll era that began in 1936.

Ole Miss running backs Jerrion Ealy and Snoop Conner both surpassed the 100-yard mark. It’s the first time since Nick Saban took over as Alabama’s coach in 2007 that the Tide has allowed that to happen.

Alabama, meanwhile, was nearly perfect on offense. It scored on eight straight possessions after fumbling at the 1-yard line and punting on back-to-back drives in the first half. Alabama finished with 723 yards of total offense, out of a possible 764 yards based on its starting field position on each possession.

Alabama running back Najee Harris finished with 206 rushing yards and five touchdowns. Wide receiver DeVonta Smith caught 13 passes for 164 yards and a TD, and also scored on a 14-yard run late in the game.

Smith’s reception total tied an Alabama school record, set twice in 2014 by Amari Cooper, making it two years in a row he has torched Ole Miss’ defense. Last season he caught 11 passes for a school-record 274 yards in a 59-31 win over the Rebels.

4
Alabama and Ole Miss were not the only SEC teams to rewrite the record book on Saturday.

Mississippi State quarterbacks K.J. Costello and Will Rogers combined to throw 70 passes in a 24-2 loss to Kentucky. That nudged past the old single-game SEC record of 69, set by LSU against Auburn in 1999.

Costello was 35-of-55 passing, for 232 yards. He is the fastest quarterback in Mississippi State history to surpass the 1,000-yard passing mark for the season, and in only four games already has three of the top four single-game completion totals on the school’s all-time list.

Running back Kylin Hill finished with 15 receptions. That tied Eric Moulds (1995 vs. Tennessee) for the school record, and was the highest single-game total by an SEC player since 2005.

Conversely, the Bulldogs only had 14 rushing attempts, which is the fewest in a game in the program’s history. The previous low was 16, in the season opener against LSU.