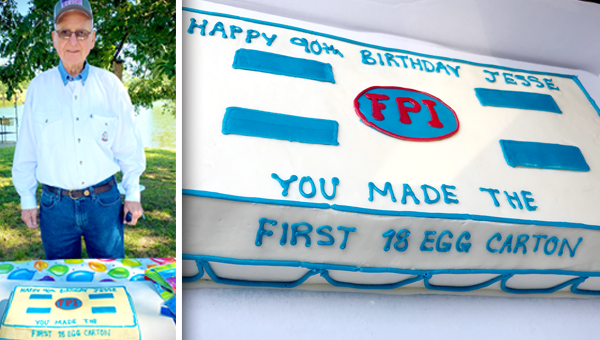 Foam Packaging Co-Founder Jesse Davenport celebrated his 90th birthday on Oct. 5. As part of the celebration, his family arranged for a cake designed as an 18-count egg carton he designed that was widely produced by the Vicksburg company. (Submitted Photos)

Jesse Davenport turned 90 on Oct. 5, and to help celebrate his birthday his family threw him a party that included a cake made to look like an 18-count egg carton. This may sound strange to most, but for Davenport, it was an appropriate design.

Davenport was one of the founders of Vicksburg-based Foam Packaging and, during his time there, he used his skills as a tool and die maker to design a mold that was used to produce the first 18-count Polystyrene egg carton in the nation.

Davenport, along with his business partner Ray English, started the company in 1971 after spending a year sending out surveys to those in the egg business. The purpose of the extensive research, Davenport said, was to find out if they were having any problems shipping their product.

After learning there were some issues with logistics, Davenport said, “We felt like there was a market for it,” (producing foam egg cartons). With a group of initial investors, Foam Packaging was started.

“Then along the way, I made the first 18-count egg cartons,” Davenport said.

The idea to develop an 18-count Polystyrene egg carton was instigated by Weems Gilbert Egg Farm, one of Foam Packaging’s customers. The egg farm was looking for a cheaper way to package their product to those who wanted 18 eggs.

And, with an 18-count carton, the product would be able to save the egg farm $100 per 1,000 cartons purchased, Davenport said.

“I felt like that would be a sure bet so we made a set of molds to develop the egg cartons and made sure it was something we could put our name on,” Davenport said.

Davenport recalled the development and beginning production of the 18-count carton was from 1978 to 1982.

“Now Debra can’t make enough 18-egg cartons because we have so many people buying them,” Davenport said of his oldest daughter, Debra Davenport Issac, who now owns her father’s share of the company. Davenport retired in 2012.

“If you are in the plastics business,” Davenport said, “It’s 24/7; that is especially true for our type of operation.”

Through the years, Foam Packaging’s 18-count egg cartons have not only been sold in the U.S., they have also shipped egg cartons to Africa, Mexico and Honduras.

“What happened in Africa — the oil industry was drilling out there and one of their people that they were drilling on, their property had chickens, and since they knew me and knew we were making egg cartons, they did them a courtesy and shipped them egg cartons every so often. That’s how they got to Africa,” he said.

Davenport now lives in Port Gibson. Prior to helping found Foam Packaging, he spent 17 ½ years with Westinghouse and three years with Letourneau.

ERDC to induct two into the Gallery of Distinguished Civilian Employees