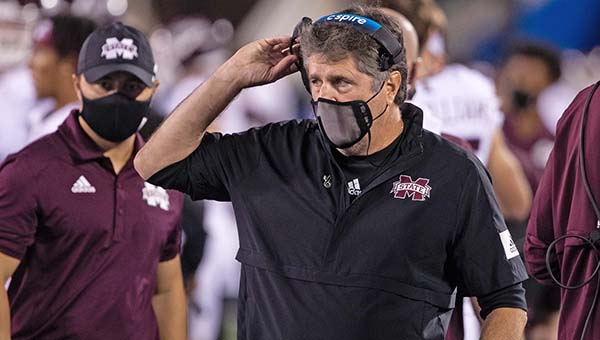 Three weeks ago, Mississippi State was the talk of college football.

Mike Leach’s Air Raid offense had just lit up LSU’s vaunted pass defense for 623 yards, quarterback K.J. Costello was on highlight shows everywhere and the Bulldogs were ranked in the Top 25.

Mississippi State is getting buzz for all the wrong reasons after putting up just 16 points in two games. Costello is on the verge of being benched, and Leach is looking for answers as the Bulldogs (1-2) prepare to host No. 11 Texas A&M (2-1) this Saturday at Davis Wade Stadium.

“The biggest thing we’ve got to do as coaches is just coach detail as hard as we can. Coach detail, reinforce detail, insist on detail,” Leach said at his weekly press conference on Monday. “Any time you start out early on there’s going to be some hiccups and bumps in the road. There’s going to be stuff that you need to address as urgently as possible and as consistently as possible. It’s just part of the whole process, especially if you’re putting in something new, and you don’t have too much time to do it. I think some of this is going to continue too as we try to hone our skills and find out who the key guys are.”

Leach said that part of figuring out who exactly those guys are could involve some roster turnover. After last Saturday’s 24-2 loss to Kentucky he hinted at “purging malcontents” from the roster, and did not back off of that position two days later.

“I think this happens every time you take over a new program. We do have a few fence-riders that are trying to decide if they’re going to commit or not going to commit to what everybody’s doing here,” Leach said. “Any time there is a transition, there’s a number of guys — and I’ve been through a number of these transitions — who are going to do the wait and see thing. Well, I’ll see if I like what I see. Well that’s too bad. The train rolls on. They need to jump on board pretty quickly or the train’s going to roll on without them.”

In the near term, the biggest change that could be on tap for the Bulldogs is at the quarterback position.

Costello set a Southeastern Conference record by throwing for 623 yards in the season-opening victory at LSU, but has slumped badly in losses to Arkansas and Kentucky.
Costello has thrown nine interceptions this season, and opponents have returned one of his picks for a touchdown in every game.

The graduate transfer from Stanford was benched in the third quarter against Kentucky in favor of true freshman Will Rogers, who completed 9 of 15 passes for 43 yards, with no touchdowns and two interceptions. Costello was 36-of-55 for 232 yards with four interceptions, including one pick-six.

The two quarterbacks alternated series in the last quarter and a half against Kentucky, and Leach seemed uncertain how much playing time each would get against Texas A&M.

“K.J. and Will ill battle it out this week, and we’ll see,” Leach said.

Leach added that it wasn’t just a quarterback issue that has caused the offense to sputter the last two weeks. He described it as an entire team issue, where the struggles of one position group cause problems for the others.

“We have the ability to do it because we’ve seen them do it,” he continued. “In some cases, maybe some of the young guys have stage fright. Some cases we just need to work harder and develop some of the experience that allows us to do that.”