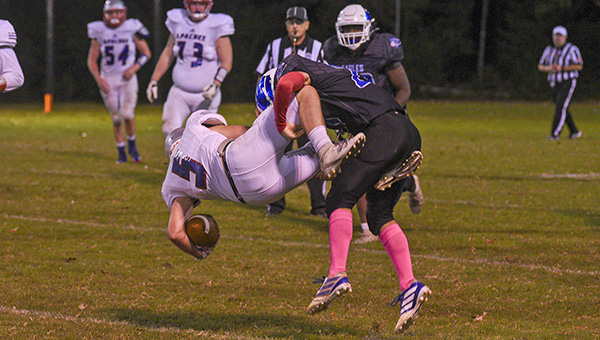 Glenbrook Academy didn’t beat Porter’s Chapel Academy with one big play Friday night. It beat the Eagles with a bunch of them.

Jackson Powell threw three touchdown passes, added 95 yards and two TDs rushing, and Glenbrook ripped chunk after chunk from PCA’s defense until nothing remained but a 48-13 margin on the scoreboard.

Glenbrook had 19 plays in the game that gained 10 yards or more. Eight of those went for 20 yards or more, including a 55-yard touchdown pass from Powell to Sammy Feaster just before halftime.

“Some of it was mismatches. We were outsized in the second level of our defense, and that created mismatches that allowed for a lot of big plays,” PCA coach Blake Purvis said. “I thought we kept playing. We still had a belief. We still had a pride about us, and we kept fighting. The morale was still as good as you can be in that scenario. They played with more heart than we have in some other games, and for that I can be proud.”

The loss dealt a big blow to PCA’s playoff hopes, but did not end them. The Eagles (4-5, 1-1 MAIS District 4-3A) can still have a chance to reach the postseason by beating defending MAIS Class 3A champion Greenville-St. Joseph on the road in next week’s regular-season finale.

“It’s just a mentality. They’ve got to believe. We have to get back to the drawing board as coaches and put a plan together for next week, have a good week of practice, and throw caution to the wind,” Purvis said. “One win can get us there. That’s still the goal. We’re still alive.”

No matter what happens against Greenville-St. Joe, Purvis said he was proud of his senior class. PCA won a total of three games in 2018 and 2019, and has surpassed that total this year.

Glenbrook’s first big play came on the opening kickoff. Powell returned it 93 yards to the 2-yard line, then threw a TD pass to Cale Hollis on the first play from scrimmage and the Apaches (4-3, 1-1) were off and running.

After getting a defensive stop on PCA’s first series, Glenbrook drove 75 yards in 10 plays — converting three third downs along the way — to take a 14-0 lead on a 1-yard run by Powell.

PCA got on the board before the end of the first quarter, on a 3-yard TD run by quarterback Jace Riggs, but Glenbrook scored three times in the second to take a 35-7 lead into halftime.
Powell capped a 13-play drive with another 1-yard run, threw an 8-yard TD pass to Hollis, and then hit Feaster for a 55-yard touchdown with 58 seconds to go.

PCA’s next score did not come until late in the fourth quarter, on a 5-yard pass from Riggs to Braden Kapp. By then, Glenbrook had added two more scores and the clock was running in accordance with the MAIS’ 35-point mercy rule. PCA’s touchdown with about three minutes left was the last play from scrimmage in the game.

Riggs finished 5-of-13 passing for 49 yards and one touchdown for PCA, and also had a team-high 52 rushing yards and one TD. Brayson Morson led the Eagles’ defense with 13 tackles.

Feaster finished with 124 total yards and one touchdown for Glenbrook, while Hollis caught five passes for 39 yards and two touchdowns.

“We fought. We don’t have depth. We have about 14 guys in the 10th through the 12th grade, and the rest are eighth- and ninth-graders. We’re playing with a lot of young guys. You get a good, big, physical team with depth and it just wears on you,” Purvis said. “I thought we moved the ball. We did good things. We just don’t have the experience right now. I was proud of the way we fought. I don’t think we got dominated. We did what we could against a very good opponent.”

The way the Mid-South Association of Independent Schools’ power point rankings work, no playoff berth is set in stone until... read more