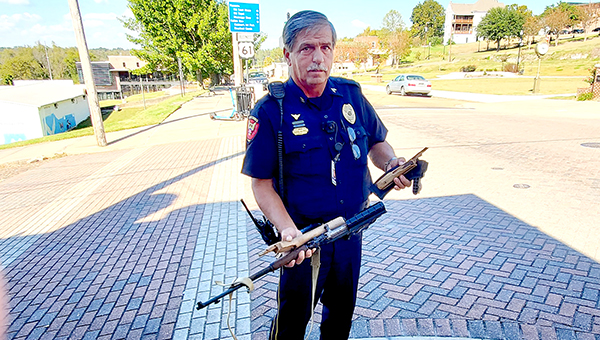 Sgt. Claude Billings displays an SKS that was turned over to the authorities Tuesday by an individual who found it along the Mississippi River. (John Surratt/The Vicksburg Post)

Assault rifle found near the river, turned over to police

An SKS assault rifle, found along the banks of the Mississippi River, is now in the hands of the Vicksburg Police Department.

Police were called to the corner of Grove and Washington streets Tuesday afternoon where a man who found the gun turned it over to officers. He said he found the weapon near the river in an area near WaterView Casino.

Capt. Mike Bryant said the rifle will now be processed. Investigators will run the serial number — if one can be found — through local and national crime computer databases to determine whether the rifle was used in a crime, where the gun was first purchased and the name of the original owner.

If the weapon, which appeared in poor condition when it was turned over to police officers, is not returned to its owner, it will be disposed of according to state law.

Thanks to the actions of a bystander, a local motorist was uninjured when his vehicle burst into flames Monday afternoon.... read more