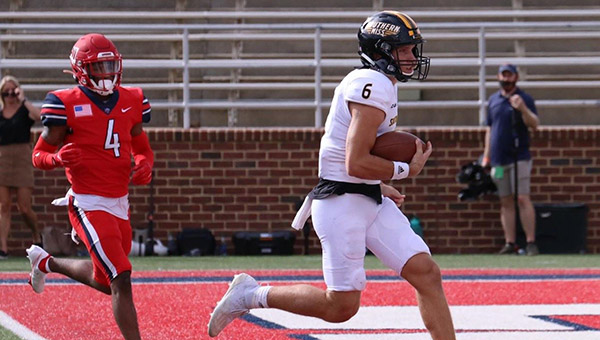 LYNCHBURG, Va. (AP) — Southern Miss cut a big deficit to a little one Saturday, but still wound up losing big.

Malik Willis threw for 345 yards and six touchdowns — five in the first half — and Liberty remained unbeaten after dominating Southern Miss 56-35.

The Flames (6-0) piled up 537 yards of offense, racing to a 35-7 halftime lead as Willis found five different receivers with scoring strikes.

Willis also ran for a 38-yard score, taking part in a school-record seven touchdowns. He completed 24 of 31 passes without an interception and rushed for 97 yards on 12 attempts.

“I thought he had his best week of prep. I thought he had his best week leading up to the game throwing the ball. I really wasn’t surprised,” Liberty head coach Hugh Freeze said of Willis’ day. “I felt like we were going to have to throw it early. The plan was to throw it early, and I thought we did it and did it very well. I think it was a really solid day. There were really only two times in the passing game that I thought he kind of went off script and didn’t do the exact way we had talked about doing something. That’s pretty good for a quarterback.”

Southern Miss (1-4) rallied with a 21-point third quarter on three rushing touchdowns by Tate Whatley and came as close as 35-28.

Willis, though, threw a 42-yard touchdown pass to C.J. Daniels with 1:32 left in the third quarter to start a 21-point surge for Liberty. Willis’ 38-yard touchdown run and a 1-yard TD run by Joshua Mack restored the Flames’ lead to 56-28 with 1:27 left in the game.

“We really had to have something happen coming into the second half. The defense got a turnover, and the offense scored. We made them punt once. All of the sudden we had 21 points on the board. It really got us back into the game,” Southern Miss coach Tim Billings said. “The tough thing is their quarterback is a really, really good football player. Defensively, we had opportunities to get off the field.”

Whatley, the Golden Eagles’ backup quarterback, played in place of starter Jack Abraham who did not make the trip to Virginia.

With interim coach Scotty Waldren unable to travel with the team after testing positive for COVID-19, the Golden Eagles also were led by Billings — the interim interim head coach. Billings had last coached in 2005 at Southeast Missouri State.

Whatley rushed for four touchdowns and passed for another, picking up 52 yards on the ground and 188 in the air. He became the first Southern Miss player to score four rushing touchdowns in a game since 2015.

Jason Brownlee also had his third straight 100-yard receiving game for the Golden Eagles, finishing with five catches for 114 yards and a touchdown.

Southern Miss, though, was unable to shake off the rust after two unexpected bye weeks. USM had not played since Oct. 3, after games against Florida Atlantic and UTEP were postponed because of issues related to COVID-19.

Tallulah Academy stomped on the gas and pulled away from Christian Collegiate Academy in a hurry. The Trojans erupted for... read more