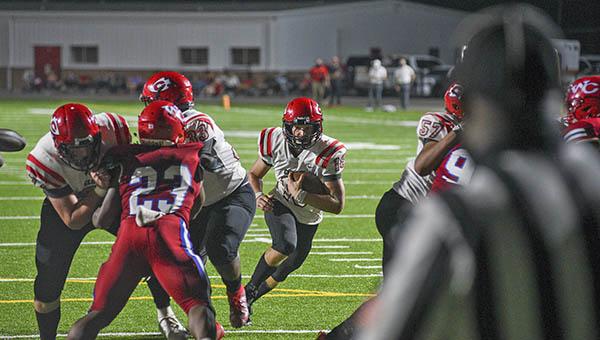 The news that Starkville High School’s football team was dealing with a COVID-19 outbreak shook up the Region 2-6A championship picture. It will force the Yellow Jackets — who were ranked No. 1 in the state before losing their last game — to forfeit a key game against Warren Central next week and might wind up costing them a playoff berth when everything shakes out.

It was a stunning development, but also one that hardly came as a surprise. It was more of a ticking time bomb that finally exploded.

The COVID-19 protocols in place for both the Mississippi High School Activities Association and Mid-South Association of Independent Schools require teams with more than a certain number of positive tests to quarantine all of their players for two weeks. That means shutting down practices and workouts, as well as games, and it seemed inevitable that at some point a championship contender was probably going to go down not with a loss on the field but one in the testing lab.

Starkville got lucky in that it has an open date this week. It will only have to forfeit one game and has banked a few wins to put itself in a good position to still reach the playoffs, provided it can play and win its final regular-season game against Clinton on Nov. 6. Several other teams around the state have not been as fortunate, and their forfeit losses have effectively killed their playoff chances.

As long as we’re living in daily fear of the COVID-19 virus and insisting on lockdowns, mask mandates and quarantines, this is an unavoidable situation that no one takes joy in. Even Warren Central coach Josh Morgan, whose team benefited the most from the Starkville situation, was somber when talking about it on Wednesday. Morgan seemed to realize that his team could be next, and had a “There but for the grace of God go I” attitude rather than a happy one.

“I hate for any team to have to go through that, because we’re all dealing with it,” Morgan said.

Starkville was not the first team to be affected by the COVID-19 protocols, and might not be the last as we approach the final weeks of the season. Important region games and even playoff games might have to be forfeited because of quarantine measures.

It’ll be interesting to see what happens if a participant in the playoffs or championship games has an outbreak. Will the MHSAA and MAIS award byes or state championships by default? Will they be able to postpone the games until the all clear is given? Will whoever lifts the championship trophies in November and December forever have an asterisk by their names if a couple of forfeit victories in the playoffs helped get them there?

We all knew the “COVID season” was going to be a strange one, where the team that wins it all might literally be the last team standing. So far, our local teams have been fortunate to largely avoid the coronavirus’ wrath. St. Aloysius and Warren Central have had postponements caused by other teams’ outbreaks, but all four Warren County schools have avoided their own outbreaks.

Let’s all hope there aren’t any more surprises coming in the next few weeks, both for the health and safety of everyone involved and to avoid cheapening an achievement so many people are striving for.