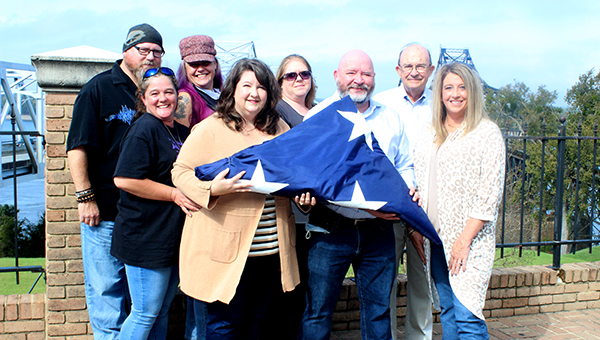 Tuesday, a flag was presented to the family of Christopher Rials by the Army-Navy Club of Vicksburg in honor of Rial's service in the U.S. Navy and his retirement. Pictured are (front, from left) Christy Tharp, Christine Rials, Christopher Rials, Jessica Haas, (back, from left) Tim Thorpe, Ami Winn, Cheryl Brown and Ed Jackson. Following the ceremony, the flag was then raised over the bridge and will be flown for three months. (John Surratt/The Vicksburg Post)

Flag to fly over Old Highway 80 Bridge in honor of naval service, retirement

In honor of his retirement from the U.S. Navy, Christopher Rials’ family did something special, something that can be seen for miles around.

Tuesday, his family joined him at the Mississippi Welcome Center, where they were presented with a flag by the Army-Navy Club of Vicksburg that will be flown above the Old Highway 80 Bridge in honor of Rials’ service to his country.

The honor was organized by Christopher’s wife, Christine, and her father, Ed Jackson.

The flag was raised Tuesday and will fly for three months.

Rials, who retired from the U.S. Navy as a lieutenant commander, entered the Navy in 1995 as a nuclear machinist mate. He began the Naval Nuclear pipeline in Orlando, Fla., and completed instruction at NPTU Charleston, S.C. He reported to his first command, the Los Angeles Class submarine USS Tucson (SSN-770), in February 1997.

Christopher was then selected for a Reserve Officer Training Corps scholarship and reported to the University of Mississippi in August 2000. He earned a degree in engineering and was commissioned into the United States Navy in December 2003.

After completing the Naval Nuclear pipeline again, he reported to the USS Michigan (SSGN-727), an Ohio Class submarine, for his Junior Officer tour. His post-JO shore duty was at Naval Sea Systems Command in PMS-401 SONAR and Acoustic Systems.

During his time at NAVSEA, Christopher completed a master’s in systems engineering from George Washington University. He then reported to the USS Key West (SSN-722), another Los Angeles Class sub, for his Department Head tour as the weapons officer in October 2010.

Upon completion, he accepted follow-on orders to Special Operations Command Europe in Stuttgart, Germany, from January 2014 to January 2017. His final tour was with the Chief of Naval Personnel Office OPNAV 125 as the Submarine and Expeditionary Forces Requirements Officer in Washington, D.C.

After retirement from the Navy, Christopher spent a year and a half as a Lead Consultant with CGI Inc., supporting the Virginia Submarine Class Program Office at the Navy Yard, D.C. He is now located in Vicksburg, where he and his wife, the former Christine Jackson from Vicksburg, have built a home. He is a Research Computer Engineer with ITL at ERDC.

Downtown Vicksburg is just weeks away from once again being able to offer hotel accommodations. Officials with Lodging Leisure Investments,... read more