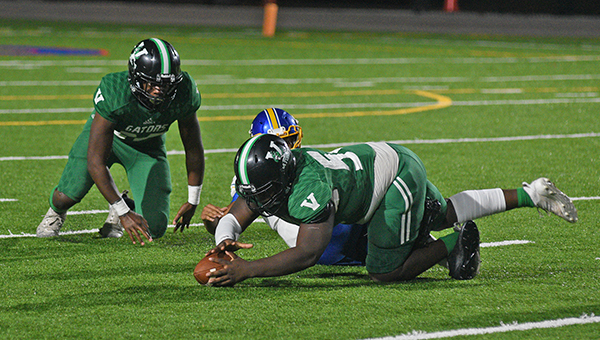 Vicksburg High’s Demarcus Johnson (52) recovers a fumble against Canton last week. Johnson is one of a half-dozen freshmen who have found their way into the Gators’ starting lineup this season. (Courtland Wells/The Vicksburg Post)

Gators’ youth movement is paying off

Vicksburg High did not field a ninth-grade football team this season. Normally, that would be a troublesome sign for a program trying to develop talent and rebuild itself into a winner. This time there was a good reason for it — most of the freshmen are busy playing with the varsity.

The Gators have started as many as six freshmen in various games this season, and eight or nine are seeing regular playing time. They are contributing in all three phases of the game, and have become integral parts of the team’s long-range plans.

“Defensively, offensively, they went in and gave us a spark. They played well, and when they grow up they’re going to be something to see,” Vicksburg head coach Todd McDaniel said. “It’s foundations for the future. When they become juniors and seniors, the game is going to move so slow to them.”

The most visible freshman on the field has been quarterback Ronnie Alexander. He led the eighth-grade Gators to the Little Six Conference championship in 2019, and stepped in as the varsity starter in Week 3 of this season against Natchez.

Alexander hasn’t had to do a lot. The Gators’ Wing-T offense mostly requires him to hand off, and he’s only thrown a total of seven passes in the last two games. He has been relatively efficient, though. He completed 2 of 3 passes for 54 yards and a touchdown in last week’s 36-20 win over Canton and did not turn the ball over.

Alexander’s solid play has allowed other playmakers to shine. Senior Sha’Kori Regan began the season as the starting quarterback, but suffered a hand injury before the opener and was moved to running back. Regan has had several 100-yard games, including a 295-yard effort against Cleveland Central. He had 106 yards and four touchdowns against Canton.

Freshman Alex Jefferson and juniors Rashad McCroy and Laurence Sullivan have also had at least one big game apiece as Vicksburg is averaging 282.8 rushing yards and 25 points in its last six outings.

McDaniel said he was not hesitant to give the younger players a chance to start.

“They’ve shown in practice that they have a lot of upside that’s equal to or more than, and you let them go. You take your bumps and bruises now,” McDaniel said. “We gave those kids the same amount of reps as the starters from early in the summer. They know the offense, they know the defense, they’ve just got to naturally get older and bigger, stronger and faster.”

While Alexander and Jefferson have gained attention for their starring roles on offense, a couple of other freshmen have broken out on defense.

Defensive lineman Demarcus Johnson had a sack and a fumble recovery in the win over Canton, and also had a tackle for loss on a two-point conversion attempt. Defensive end Tyler Carter nearly had a sack on Canton’s final drive, but quarterback Jacobian Morgan flipped the ball away as he was being tackled.

The youth movement for the Gators is starting to pay dividends. Beating Canton allowed them to head into next week’s regular-season finale at Holmes County Central with their playoff hopes still alive. It has also provided a needed spark after back-to-back shutout losses to start the season, and given hope that the stars of tomorrow are starting to rise today.

Vicksburg has an open date this Friday. Its originally-scheduled opponent, Callaway, opted not to play this season because of COVID-19 concerns.

“We have a nice eighth-grade class coming up and we don’t have many juniors. So we have a young football team and we’re going to continue to grow and continue to get better,” McDaniel said. “Gator Football is going to have something to be proud of in the future.”