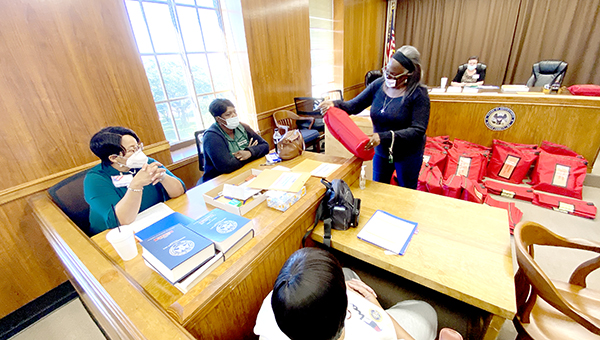 A group of nine poll workers has started the process of organizing a record number of absentee ballots cast by Warren County voters.

The poll workers, part of the resolutions board, began their work at 1 p.m. Tuesday. They will spend the next few hours looking over the 4,089 absentee ballots, making sure they are properly sealed, documented and have signatures matching those of the voter. The hope, election officials said, is to be done before 7 p.m. — the moment when polls close and the absentee ballots can officially be counted.

“We hope we are done by 7 p.m.,” District 3 Election Commissioner Elva Smith said. “If not, we will start counting those that have been organized and keep working through those that have not.”

The number of absentee ballots cast during this election set a new record in ballots filed, breaking the record of 1,775 set in 2016.

Even though the board members are organizing the ballots, they cannot open them to see who or what the voter decided. That will be done at 7 p.m. when the ballots are opened and processed through a voting machine.

“So glad to know the people cared enough to vote. It’s a good thing,” Smith said. “It’s nice to know there was that much interest among the voters in Warren County.”

The increased interest in this election, highlighted by the surge in absentee voting, has also resulted in larger than expected turnouts at polling places throughout the county Tuesday. Election officials said they have heard reports of huge numbers of voters throughout the day.

Polls close in Warren County at 7 p.m. Once the polls are closed, poll workers at each precinct will properly shut down each poll and deliver the results to the Warren County Courthouse where they will be announced.

The Vicksburg Post will be providing regular updates throughout the evening online at vicksburgpost.com and on the newspaper’s Facebook page at www.facebook.com/thevicksburgpost. The Post will have extensive coverage of Tuesday’s election in the Wednesday edition of the newspaper.