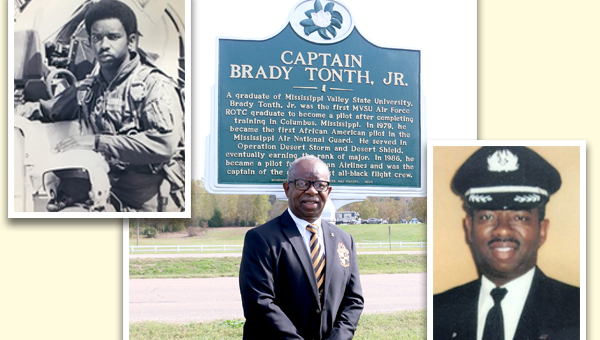 While millions across the nation were being honored on Veterans Day, one Vicksburg resident was not only being acknowledged for his duty to the country, he was recognized for his history-making achievements.

Wednesday, a historical marker was unveiled at the Vicksburg Municipal Airport in recognition of the many firsts achieved by Ret. Maj. Brady Tonth Jr. during his aviation career.

“It’s overwhelming,” Tonth said, in response to the unveiled marker. “It’s overwhelming because I stood on the shoulders of other people. I never looked at doing what I do as an honor, I was just doing my job.”

Tonth, who was raised in Mound Bayou, was the president of the 1969 senior class at McNair High School. Earning a band scholarship to Mississippi Valley State University, he graduated  in the top five percent of his class and earned a Bachelor’s degree in Political Science.

Tonth’s history-making moments began when he became the first ROTC pilot to be commissioned as an officer from MVSU in 1973. He was assigned to Columbus Air Force Base, and there became the first black trainee from Mississippi to complete the Air Force Pilot Training School.

Tonth joined the Mississippi Air National Guard, where he became the first Black pilot to fly for MANG.

And with 20 years of service in the armed forces, serving in both Desert Storm and Desert Shield, Tonth was the first Black pilot to carry transport survival goods to a major war.

Other firsts for Tonth include being captain of an all-Black three-member flight crew to pilot a commercial airliner for American Airlines in 1986, the first Black pilot to fly a passenger jet from Jackson’s Medgar Evers Airport, and the first and only Black pilot from Mississippi who is certified to fly 26 different aircraft, both private and commercial.

Sharing some of the most memorable moments in his aviation career, Tonth said one highlight was his first solo flight while working toward his pilot’s license.

“Another was when I met Gen. Chappie James, a four-star Black general,” he said.

Tonth said he enjoyed his time spent as Freeman’s personal pilot and also recalled an unforgettable experience when in flight.

During the service held prior to the unveiling of the historical marker, one of the guest speakers referred to Tonth as a trailblazer. While this is true, the retired major credited his success to others — others of a different race.

“There were no Black folks doing this (piloting) so in order to achieve what I did, God used white guys. A guy named Mr. Steve took me flying for the first time and bought all my books and mentored me,” Tonth said.

“An unknown white guy in Greenville, Mississippi took me flying when I was interested in flying and throughout my whole start in aviation there were no Black people to help me, so that is an example of how white people helped Black people,” he said.

Tonth also gave a shout out to Merrell Guston, a Navy pilot who befriended him when he first moved to Vicksburg.

“He was real nice to me and back in those days Black folk and white folks didn’t really hang out together,” Tonth said.

Tonth is married to Jannie Woodson Tonth and the couple has two biological children, two self-adopted children and three grandchildren.