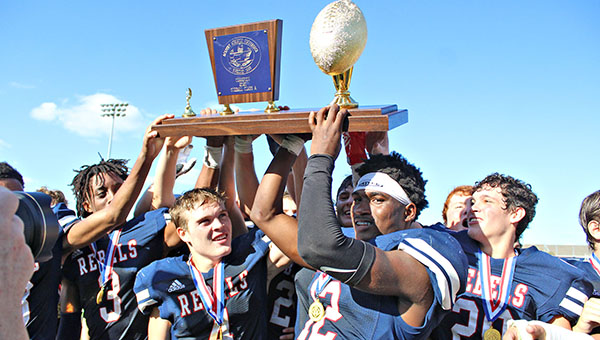 Briarfield Academy seniors Crews Fortenberry (4) and T.J. Baker (12) hold up the MAIS Class 1A football championship trophy alongside their teammates after beating Tallulah Academy 46-34 Friday in Jackson. Baker had 492 yards of total offense and accounted for six touchdowns to lead the Rebels to their second state title in a row. (Ernest Bowker/The Vicksburg Post)

Briarfield’s plan was simpler, and much more effective — give the ball to T.J., and watch him run for a lot of TDs.

Baker, Briarfield’s senior quarterback, accounted for 492 yards of total offense and six touchdowns — all of them longer than 50 yards — as the Rebels beat their archrival Tallulah 46-34 in the Class 1A championship game on Friday afternoon.

Briarfield (11-0) ran its winning streak to 18 consecutive games, and claimed its second Class 1A championship in a row. Briarfield also won the 2017 MAIS 8-man championship, giving it three titles in four years.

“It’s awesome. We just made history. We’d never played Tallulah in a state championship game, never went undefeated, and never went back-to-back. So we just did three things our school has never done,” Briarfield coach Beau Travis said. “But it’s bittersweet for me because I never get to coach those seniors again. They all give their everything, and you couldn’t ask for a better group of kids.”

On Friday, no one was better than Baker. He scored on runs of 69, 88, 73, 52 and 51 yards to finish with 331 rushing yards on only 13 carries. He also threw a 65-yard touchdown pass to Undrea Spencer with 1:43 left in the game that accounted for the final points and sealed the victory.

Baker was 4-of-13 passing, for 146 yards and the one touchdown. He also spearheaded Briarfield’s defensive effort by making 20 tackles from his safety position.

“They couldn’t stop us, so coach kept on running it,” Baker said. “It’s tiring. But I have to push through for my teammates.”

Baker’s big plays were the perfect antidote for a Tallulah attack that was plodding but effective. The Trojans rushed for 293 yards as a team — Carter Sullivan led them with 142 and a touchdown on 19 carries — and controlled the ball for 31 minutes of the 40-minute game. They ran 78 plays to Briarfield’s 28.

Baker kept bailing the Rebels out of big holes, however, or just breaking Tallulah’s momentum.

Baker’s 69-yard TD in the first quarter came right after the Rebels stopped a 5 ½-minute Tallulah drive on downs at the 8-yard line. His 88-yard touchdown run came on a third-and-33 play after a series of penalties backed the Rebels up to their 12-yard line. The 51-yarder in the fourth quarter was two plays after the Trojans had scored to cut it to 32-28.

“We did what we wanted to do. But when you have it third-and-40 at your own 10-yard line and three boys come in and converge and he breaks it, there’s nothing you can do about that. In a straight-up ballgame, we can play them. But that one player makes a big difference,” Tallulah coach Bart Wood said. “I had four guys on him. When they had a running back in the backfield, I had five on him. He’s just so much faster. We don’t have that player with that speed. We have heart, we have all this, but we don’t have anybody with that speed.”

Baker’s two biggest touchdowns came in the third quarter. Tallulah scored on a 7-yard run by Paul Michael Machen, and added the two-point conversion to tie it at 20 with 4:27 remaining. On the next play from scrimmage, Baker ripped off a 73-yard touchdown run to put Briarfield back in front.

Tallulah then fumbled near midfield on its next possession, and Baker went 52 yards for the touchdown and a 32-20 lead two plays later.

On the fumble, Tallulah’s Sullivan was initially ruled down. The MAIS uses a video replay system for its championship games, however, and Travis successfully challenged the call. Briarfield got the ball, and soon after a two-score lead that it mostly maintained until the end. Although they got it back to a one-score deficit twice in the fourth quarter, the Trojans never again had the ball with a chance to tie the game.

“I knew when it happened that he fumbled it. As soon as (linebacker Carter Coullard) hit him and he started falling down I saw the ball hit the ground,” Travis said. “There wasn’t a doubt that he got it, but you still have to review it. I know it was a tough call for the officials, but that was huge. That was a momentum swing. That was the difference in the game.”

Wood, meanwhile, pointed to another fumble as the difference. In the final minute of the first half, his quarterback Dee Morgan was hit at the goal line and lost the ball, and Briarfield recovered. Instead of tying the game there and possibly taking the lead on the opening drive of the second half, it kept the Trojans playing catch-up.

The goal line fumble, combined with the drive that stalled inside the 10 and a 55-yard interception return touchdown by Spencer, were all crucial offensive missteps in a game where the Trojans needed every point they could muster.

It was reminiscent of the teams’ regular-season meeting, when Tallulah had several drives inside the red zone come up empty in a 16-6 loss.

“This time, to me, it was a little more of execution,” Wood said. “Last time we got penalties called on us. This time it was just some missed blocks and maybe some bad play calling by the coach. We scored a lot more this time than last time. It’s just what happens.”

The championship game meeting between the two Northeast Louisiana rivals brought an end to a strange football season for both. Tallulah won five consecutive games after a 3-3 start to reach the championship game for the fifth time in seven seasons. Even though they didn’t win, Wood said he tried to tell his players to remember all that they did accomplish.

Briarfield, meanwhile, successfully defended its Class 1A championship by going undefeated. Every player from last year’s roster returned for this run, in which the Rebels only played two true home games because of Louisiana’s COVID-19 restrictions.

“It feels great. It’s a special group of guys,” said linebacker Crews Fortenberry, who had 12 tackles on Friday. “We’re the first team ever to go back-to-back in school history, and to finish with a perfect record you can’t ask for anything more than that. We’ve been working hard all season for this. At the start of the season you didn’t even know if you were going to get to play a state championship game. It means a lot.”