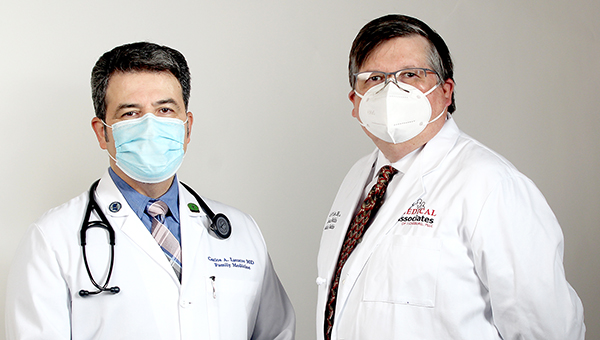 Dr. Carlos Latorre and Dr. Dan Edney were named the 2020 Men of the Year by readers of The Vicksburg Post and the newspaper's annual Best of the Best campaign. (Tim Reeves/The Vicksburg Post)

For more than eight months, medical officials in Mississippi have tirelessly battled an enemy that has infected more than 130,000 people and killed nearly 4,000 in the state.

The months-long fight against the COVID-19 virus began on March 11 in Mississippi when a patient near Hattiesburg was first diagnosed. It would be 18 days later before the first case was confirmed in Warren County.

In that time, health officials from the emergency medical personnel at the Vicksburg Fire Department to doctors, nurses and respiratory therapists — and, sadly, the coroner — have faced far more than they ever expected and seen things they would hope to forget.

Two of those individuals at the forefront of the fight against COVID-19, Dr. Dan Edney and Dr. Carlos Latorre, have not only worked to control the virus at home but have been among the medical officials giving advice and counsel to public officials on the local and state levels. Both are among the physicians who have served on Gov. Tate Reeves’ COVID-19 task force and are among those who give weekly counsel to Vicksburg Mayor George Flaggs Jr. and members of the Warren County Board of Supervisors.

It is because of that work, leadership and the unending dedication of their teams that both Edney and Latorre have been named the 2020 Men of the Year by readers of The Vicksburg Post and the newspaper’s annual Best of the Best Readers’ Choice Awards.

For both Edney and Latorre, the past eight months have presented a test they had never seen before, but one that has presented so many lessons.

“In March we didn’t have a clue. By June we knew we were going to be in it for the long haul when summer didn’t knock it down. We were being warned by public health officials  — state and national — that winter would not be good,” Edney said.

“Initially, the thought was that when it got warmer the virus would die down, sort of like the flu that almost drops out completely by the summer,” Latorre said. “Summer came and it did not go down. Instead of dropping out, it surged.”

Both said the lessons learned by medical professionals at every level have started paying dividends.

“It is almost like we are treating a different disease now. In March and April, when everybody was dying, we were just trying to keep people alive back then,” Edney said. “Now we know very well how to keep people alive and know so much more about mitigation. We’ve really done a good job of protecting our high-risk people.”

But, he warned, too many people have grown complacent.

“It’s kind of amazing that we’ve gotten callous to where we think 25 deaths per day is not too bad,” Edney said. “But, that is 25 people a day who should not be dead.”

Latorre said that as treatment of the virus has changed, so too has the understanding of the impact masks have on slowing the spread of the virus. He said medical officials understand better how effective masks are and that they do work. He also understands people are growing tired of wearing them.

“When you listen to a lot of health experts, the easiest thing to do is wear your masks when out in public. So if everybody wears it then there’s a lot less transmission,” Latorre said. “Even after the vaccine is available, it doesn’t mean that I am not going to wear my mask ever again, so we need to continue wearing it.”

Edney said the consistency of the decision making by local leaders — including Flaggs and Warren County Board of Supervisors’ President Dr. Jeff Holland — has allowed Vicksburg and Warren County to do better than other areas of the state. He also applauded the leadership of state health officials, particularly State Health Officer Dr. Thomas Dobbs.

“The collaboration between private medicine and public medicine has never been stronger especially with the state department of health, they are the true heroes,” Edney said. “Speaking for myself, I don’t go to the CDC, I don’t listen to what they say. I have lost confidence in them. I listen to Thomas Dobbs. I listen to Thomas Dobbs because I trust what he is saying. I know he is not giving any political doublespeak, he’s not trying to hold his job up, he is trying to get us through this pandemic.”

Latorre said one of the biggest lessons for him has been the need for the United States to become less dependent on foreign countries for manufacturing medical supplies and equipment.

“We didn’t have enough. We were certainly unprepared for this. I don’t think we will be any more,” Latorre said. “I was impressed by how quickly we were able to coordinate care statewide. It was amazing and makes everything worthwhile. Wish it didn’t happen like this but the response from so many sectors is my major takeaway.”

While both appreciated sharing the Man of the Year title, they deflected the honors to others.

“I am humbled and honored,” Latorre said. “I will receive this on behalf of all the healthcare workers who are out there every day here in Vicksburg, in Warren County and in our state.”

Edney said it is those medical professionals he sees each day and has the chance to work with — whether it is at his clinic or at Merit Health River Region — that he will honor in accepting the award.

‘You never know until it happens, but the true fearlessness, the true bravery of our frontline healthcare professionals is what has impressed me,” Edney said. “I remember, I had the first hospitalized COVID-19 case in Warren County at Promise Hospital and I remember that first cadre of nurses and respiratory therapists who were working with me going into that room when all we knew was what was going on in New York and all these people dying. And here we are with our first case and nobody quit, nobody went home, nobody refused, they just went about their professional duty.”