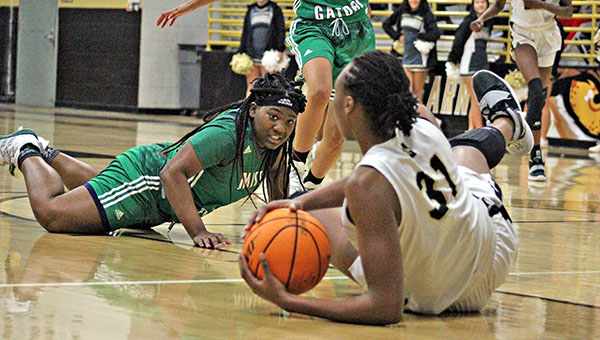 FLOWOOD — With a roster that only has two seniors and eight sophomores, one of the big challenges facing the Vicksburg Missy Gators this season is learning how to do some of the little things all over again.

The lesson on how to close out a game was learned the hard way Tuesday night.

The Missy Gators let a double-digit lead slip away in the second half and only went 18-for-32 at the free throw line. Every missed opportunity and point counted, as it led to a narrow 63-61 loss to Northwest Rankin.

“That’s a product of us being young. We’re still learning how to play together, simply because of no summer, no offseason, it makes a difference. The girls worked hard. We just came up short,” Vicksburg coach Troy Stewart said.

Vicksburg (2-3) led by 10 points midway through the third quarter, but went 6 ½ minutes without a field goal. Northwest Rankin went on a 19-3 run in that span to take the lead and never gave it back. Although the Missy Gators eventually stopped the bleeding, a wave of missed shots and free throws down the stretch kept them from regaining the lead.

Their last chance came in the final seconds. Northwest Rankin’s Lexus Keyes split a pair of free throws with 5.6 seconds left for a 63-61 lead. She missed the second free throw, and a scramble for the rebound ensued. Vicksburg came away with it, but used up most of the remaining time and never got a final shot off.

A number of the young players on this year’s roster contributed to Vicksburg’s run to the Class 5A semifinals last season, but are in more prominent roles this year. Stewart said their relative inexperience showed at the end of Tuesday’s game.

“Last year, we were a veteran team. We’re back to being sophomores again. We’re learning to win these games all over again,” Stewart said.

Tuesday was the Missy Gators’ first game since beating Raymond on Nov. 19, and only the second in 25 days. The Missy Gators have been able to avoid any COVID-19 issues among their own players, but had four games in November postponed because of outbreaks among other teams. Stewart said the constantly shuffling schedule has been difficult to deal with.

Barring any further adjustments, the Missy Gators will make up for lost time in the next two weeks. Tuesday’s game was the first of five in an 11-day span.

The Missy Gators will go to Madison Central on Thursday night, and then host Warren Central Saturday at noon. The latter will be played at Vicksburg Junior High and, while it is a rivalry game that carries a lot of weight, is more important for the opportunity to gain experience and confidence, Stewart said.

“I want to take that game as another game, even though it always means something because it’s a rivalry. But it’s still a learning process for us,” Stewart said. “I’m going to use this season up until district to get our chemistry together, to get our play together so we’ll be ready in January. It’s a tough loss and I can deal with this game.”

PCA had more than 20 steals as a team.

The Lady Eagles will host Riverfield Academy Thursday at 6 p.m.

Gators get back on the court, but not into win column

FLOWOOD — After nearly a month off, the Vicksburg Gators tempered some of their expectations for Tuesday’s game against Northwest... read more