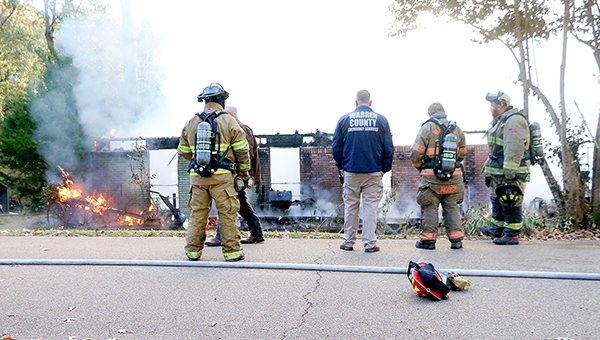 Fire calls heat up in the midst of recent cold snap

An electrical problem is believed to be the cause of a Tuesday morning fire that damaged a small section of the front of China Buffet, 4150 South Frontage Road.

Vicksburg Fire Chief Craig Danczyk said the fire was reported by a 911 call about 4:11 a.m. coming from people driving by the restaurant. They reported smoke coming from the roof and the eves of the building.

“He was familiar with the building and they were having another issue in the same area,” he said. “The area was near the roofline on the front of the building. I do believe something failed, whether it was a wire or something else.”

“Ladder 3 was the first unit on the scene and reported smoke was visible,” he said. “I think those who called it in to 911 probably helped us and the building owner because it (the fire) didn’t have time to get to something worse.

“Ladder 3 was down the street and had a quick response and was able to put water on the building and suppress it (the fire).”

“Everything was on the front of the building,” he said.

About two hours after the China Buffet fire, Fisher Ferry, Culkin and Bovina firefighters were called about 6:37 a.m. Tuesday to a house fire about at 204 West Drive.

Warren County Fire Coordinator Jerry Briggs said James Hicks, the occupant of the home, woke up to find the house full of smoke. Hicks went through the house, which was on fire from the front porch/carport area and in the roof and attic space, to escape the blaze.

Hicks was able to get out of the house through another door and called 911.

Briggs said the fire is believed to have started in the carport/living room area. The cause is undetermined. He said Hicks was examined at the scene by VFD paramedics but refused treatment.

Briggs said an electrical outlet in the bedroom caught fire in the wall causing minimal damage to the room.

“Firefighters and (sheriff’s) deputies got in there pretty quick and got it out,” he said.

Briggs said a woman living in the home called 911 about the blaze. No one was injured.

Fisher Ferry and LeTourneau firefighters responded to the blaze.

With Mississippi and Warren County reporting spikes in the number of COVID-19 cases, local churches are either canceling their traditional... read more