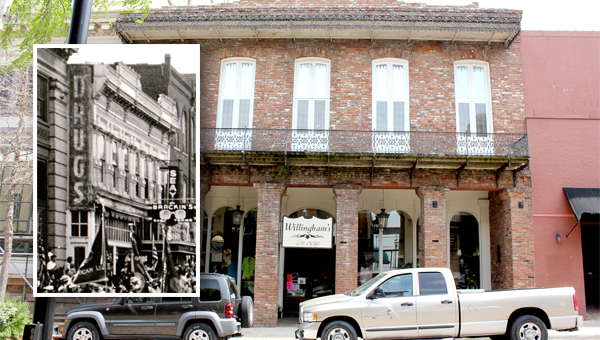 History of downtown building is built on sweets and cigars

This iron front building located at 1305 Washington St., which today is home to Willingham’s, was built between 1893 and 1896 and was two storefronts with offices on the second floor.

The Herald reported that Ruhman was “devoted exclusively to the culling of the crème de la crème of smokers’ supplies, and an examination of the cigars daily coming in will charm and delight the most fastidious, he having bought strictly for cash, getting the benefit of all discounts, from first leading manufactories in the world, hence he can offer you special inducements.”

Julius Ruhman died on Jan. 2, 1911, after a long illness. He was born in Germany and moved to Vicksburg in about 1878 and was engaged in the clothing business before opening the cigar store. He operated a confectionery in addition to the cigar store. Ruhman also sold tickets for the Netherlands American Steam Navigation Company and claimed to be the only licensed member of the American Ticket Brokers Association in Vicksburg.

In an article in the Daily Commercial Herald in 1896, it was reported that he had “sold to Rev. Father C. Mahe, of Lake Providence, a ticket from Vicksburg to Rotterdam and return, via New York, per steamer Werkendam. It is a great convenience to be able to obtain through passage in this manner and travelers to Europe should bear Mr. Ruhman in mind.”

In 1907, the storefront on the left was leased for a “motion picture show” and the Phoenix Cigar Store and Billiard Hall and Fischel and Hirsch Cigars and Billiards were located on the right. The theater became the Olympia Café by 1911 and the pool halls became the Soda Grill by 1918.

In 1924, you could pick up your prescriptions at Bryan Drug Company on the left and then eat at Seay’s Restaurant Grill on the right. By 1937, Crystal Pharmacy was located on the left and was there until the early 1940s. Seay’s was there as well and remained until about 1949.

In the 1950s and early 1960s, Rex Smoker Billiards and Café occupied both sides and in the 1970s, Bettye K. Ladies’ Clothes became a fixture in the building and in downtown. The building was extensively remodeled in the 1970s and today is Willingham’s.

When it became clear that COVID-19 would make their fall Pirates and Princesses Tea Party impossible, the Junior Auxiliary of... read more