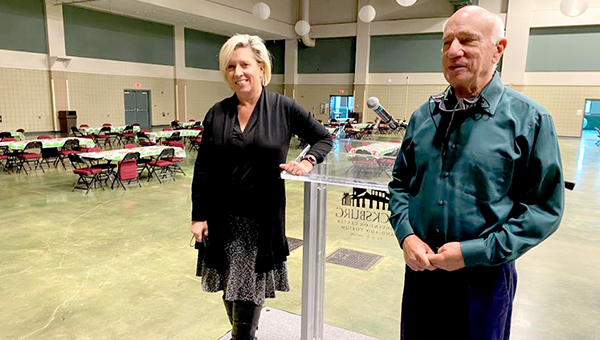 Vicksburg Convention Center Executive Director Annette Kirklin and V105.5 owner Mark Jones are pictured in the convention center's large exhibition hall. Normally, the hall would be set up for the annual Christmas Caroling Contest, but this year's event was canceled due to COVID-19 concerns. (Anna Kate Doiron/The Vicksburg Post)

The holiday season is one rich with tradition. There is the Christmas tree, the placing of milk and cookies for Santa, and the singing of Christmas carols.

But this year, a tradition in Vicksburg built on 15 years of history will not be held. Organizers with the annual Christmas Caroling Competition, which fills the Vicksburg Convention Center for several nights each December, will not be held due to concerns with the ongoing COVID-19 pandemic.

“There’s not another event really like this. That would have to be in the eye of the beholder,” Jones said. “It’s something that obviously a lot of people come to and enjoy.”

Canceling this year’s event is not just felt in Vicksburg, but throughout the region. Jones said the annual competition, which over the years has awarded more than $100,000 in cash prizes and welcomed thousands of guests, has attracted guests and competitors from hundreds of miles away.

For 15 years the competition has filled the large exhibition hall of the Vicksburg Convention Center with Christmas music, but this year the room sits eerily quiet.

Jones said it was a difficult decision to cancel the event. He was worried, however, about the spread of the virus during an event that attracts huge crowds. Singing is also one of the activities experts say has the biggest potential to spread the virus.

“We’re missing the music and the merriment of everybody coming through the doors,” Kirklin said. “There’s a lot of happiness that’s not in the building right now.”

While the competition will not occur in 2020, Jones still has a plan to bring Christmas spirit to the listeners of V105.5.

A program featuring contestants singing songs from past competitions will air Dec. 23 at 6 p.m. and end Christmas Day.