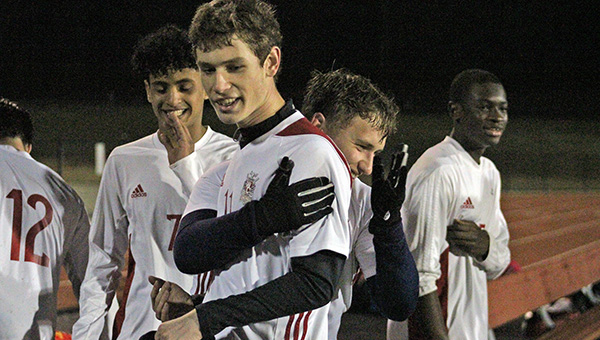 Warren Central’s Justin Hasty (11) celebrates with his teammates after scoring the clinching goal in a penalty kick shootout against Clinton on Tuesday. (Ernest Bowker/The Vicksburg Post)

CLINTON — On Monday afternoon, Warren Central’s boys’ soccer team spent a little bit of time in practice working on penalty kicks. Justin Hasty missed two of his five. When it came time to do it for real, though, Hasty didn’t flinch and he didn’t miss.

The junior midfielder calmly stepped to the line as the potential game-winning goal in a shootout against archrival Clinton on Tuesday. He tapped his shot into the open left side of the net, giving the Vikings a huge victory and a leg up in the Region 4-6A standings.

“I was so nervous, but hyped at the same time. I was freaking out, but I was like, ‘I can do it.’ And I made it,” Hasty said. “When we were on the bus we were like, ‘We want to beat them so bad.’ We’ve been wanting to beat them for so long, and we got it.”

Warren Central (7-2) beat Clinton (3-3-1) for the second time in a row for the first time in at least 10 years. More importantly, Tuesday’s victory in the Region 4-6A opener and a close loss last week at Northwest Rankin showed it will be a contender in Class 6A, coach Greg Head said.

This was the first of two games between WC and Clinton. They’ll play at Viking Stadium on Jan. 12.

Warren Central and Clinton traded punches and counterpunches, as well as a few literal shoves — a half-dozen yellow cards were issued — all game long. There were only about 13 minutes out of 100 in regulation and overtime where one of them held a lead.

Warren Central’s Tony King broke the ice with a goal in the 11th minute, but Clinton’s Jarran Hoskins tied it in the 14th. King scored again early in the second half, but the 2-1 lead only lasted seven minutes before Hoskins headed in a free kick from Charles Chisolm for the equalizer.

Clinton took the next lead, when Hayden Thomas bounced in a free kick from the top left corner of the box in the 57th minute. Warren Central only needed three minutes to tie it again, 3-3, when Brandon Gilliam hammered home a rebound off a shot by King.

Although each team had a handful of opportunities, the score remained tied through the last 20 minutes of regulation and two more 10-minute overtime periods. Warren Central keeper Ben Vroman finished with 10 saves — including a point-blank stop on a breakaway by Keaton Cole in the 74th minute — and Clinton’s Price Nixon stopped five of the 12 shots he faced.

“That was stressful,” Vroman said of the game’s momentum swings. “It was hard to keep your mind and your emotions calm so you can make good decisions.”

After the two overtime periods failed to produce a winner, the Vikings and Arrows lined up for a penalty kick shootout. King and Hoskins both converted their chances to start things off, and then Thomas and WC’s Anden McClurg both missed the second kick. After that, Warren Central took control.

Vroman deflected a shot by Luke Hopkins on Clinton’s third attempt, sending it off the post and out.

“My main focus was just getting focused and reading the player. As soon as he walked up I knew he was going right, so when he blew the whistle I was going right,” Vroman said. “I just went down and laid out and happened to save it. It was like a thousand pounds off your shoulder. It was the greatest feeling in the world.”

Gilliam converted on Warren Central’s next PK, and then Logan Cole sent Clinton’s fourth attempt high over the goal. That brought Hasty to the line with a chance to win it. Hasty got Nixon to lean to the right and sent a soft grounder into the left side of the net to win the shootout 3-1.

Warren Central doesn’t always work on penalty kicks in practice — shootouts are usually only used in region and playoff games — but Head said he had a feeling it might come in handy. His instinct was on the money, and Hasty paid it off.

“I was worried, because we just don’t have the depth. We’ve got a good team, we just don’t have the depth, and I kept thinking if we went to those two 10-minutes (overtimes) we were in trouble. But, matter of fact, we looked better in the 10 minutes than they did,” Head said. “If we got to penalty kicks I figured we were going to win because we practiced it yesterday. Thank God I did that.”

The St. Aloysius Lady Flashes managed to keep things close in the second half against Hartfield Academy, but not close... read more