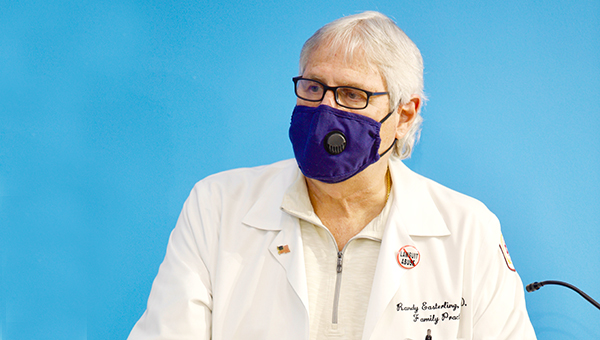 Doctor regarding COVID-19: Mid-January is going to be a disaster

In the nearly nine months of the COVID-19 pandemic, Vicksburg and Warren County have already experienced one wave of the virus and is in the midst of another. It is for that reason a local doctor is praising the leadership of city officials and urging residents to take this virus seriously.

“This is not the time to take the foot off the brake,” Vicksburg family practitioner Dr. Randy Easterling said at Thursday’s meeting of the Board of Mayor and Aldermen. “This is the time to emphasize wearing your mask, social distance, wash your hands and don’t have social meetings. It’s imperative, important, to wear masks. That’s science. Social distancing is very, very important and wash your hands.

One reason for the potential increasing January numbers, Easterling said, is the holiday parties between Thanksgiving and New Year’s, which he said will help spread the virus.

And social gatherings, he said, need to be avoided.

“If you are in a social gathering outside your nuclear family with 10 people, there’s a 19.6 percent chance that one of those 10 people are shedding the virus. If that number goes up to 20, there’s a 36 percent chance someone’s getting the virus,” Easterling said. “How do you protect yourself against it? Don’t have the thing to begin with.”

As for Warren County, state health officials reported 317 new cases in the past two weeks, by far the most of any two-week period in the pandemic, and puts the county at risk of being declared a virus hot spot by the state.

The county has also reported seven virus-related deaths over that same period.

Easterling commended the Board of Mayor and Aldermen for approving the emergency order and the mask mandate.

“I personally have been very comfortable the last 10-11 months with how y’all have managed it,” Easterling told the board. “I think you have been forward-thinking and your actions have saved lives. This you did right.”

A joint project by the Mississippi Department of Archives and History and the American Battlefield Trust to acquire property at... read more