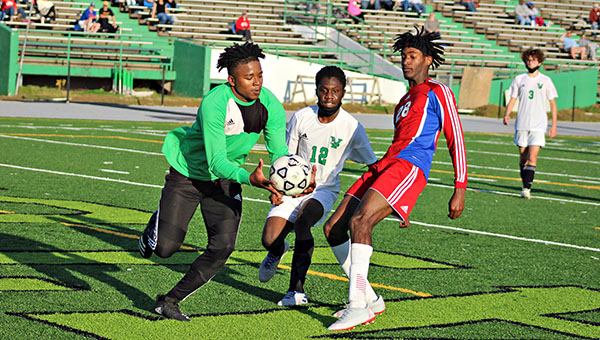 When Sammie Nwaneri fired a shot just over the head of Warren Central goalkeeper Connor Scribner, it sent a message that the Vicksburg Gators had come to play against their crosstown rival.

It also sent a message to Warren Central that it needed to find some life in its tired legs and put the Gators away before they could gain any more confidence.

Warren Central scored three goals in the last 10 minutes of the first half to take firm control of the game, and added a couple more in the second half for good measure to beat the Gators 6-1 on Saturday afternoon.

Warren Central beat Vicksburg for the 15th consecutive time, a streak that started in 2011. It also won its third game in a span of five days.

“I think we were taking everything a little too easy. When they scored it was like, ‘OK, we’re going to have to start playing a little bit more,’” Warren Central coach Greg Head said.

Vicksburg goalkeeper Sha’kori Regan made 12 saves, including one on a penalty kick by King early in the second half. Regan’s effort and a surprisingly stubborn defense kept the Gators in the game for most of the first half, and gave a competitive feel to the game even after the Vikings gained some distance on the scoreboard.

“Sha’kori did amazing. It’s just getting them to understand the defense more. We’re young in a couple of places. I think practicing and coming to work every day will help them get better,” Vicksburg coach Christopher Lacey said.

The decisive stretch of the game was the last 10 minutes of the first half. After Nwaneri’s goal — on the only shot Vicksburg put on frame the entire game — tied the score at 1 in the 28th minute, King answered with a goal two minutes later to put Warren Central back in front.

Green then floated a well-placed shot past Regan into the right side of the net in the 39th minute, and Shuaibi scored from close in just before the first-half whistle to push it to 4-1.

Shuaibi scored again in the 68th minute in the second half, and assisted Neligue’s goal in the 74th to finish the scoring.

“I think it shocked them a little bit. I don’t know if they expected us to do that or not,” Lacey said of Nwaneri’s goal. “I wish we could have capitalized some more on it, but it showed me the kids have a little bit of fight in them. I looked at it as a positive for us more than anything. I think it motivated our kids.”

Both teams will return to action Tuesday night. Warren Central will face Germantown in a girls-boys doubleheader starting at 5:30 p.m. at Sports Force Parks on the Mississippi. Vicksburg will also play a doubleheader beginning at 5:30, at Raymond.