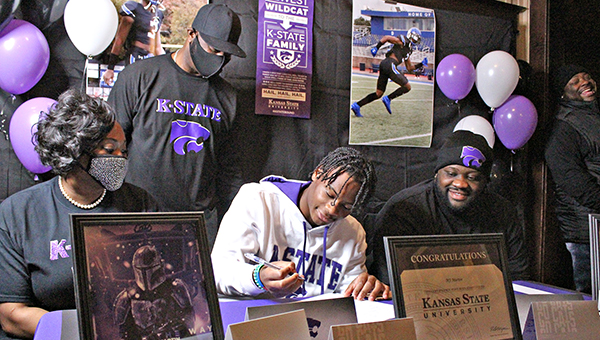 Marvin Martin left Vicksburg earlier this year to learn a little about life. He came back to take the next step in his journey.

Martin, who played two football seasons at Vicksburg High before transferring to Trinity Christian School in Cedar Hill, Texas, in 2020, signed with Kansas State on Wednesday. He said it was nice to share the moment with family and friends, back in his hometown.

“It feels great to share my success with my family, especially since they helped me along the way,” said Martin, who plays safety.

That help included a piece of advice from his older brother Carlos Williams. He advised Martin that he’d have to leave Vicksburg and head into the world at some point, which encouraged him to head to Texas.

Martin was already on many college scouts’ radars as early as his sophomore year at Vicksburg High, but became one of the top recruits in the country at Trinity. He was rated as the 56th best safety in the country by ESPN, and helped Trinity win the Christian Athletic League national championship this season.

In 2019, with Vicksburg, Martin had 80 tackles, five forced fumbles, and led Warren County with six sacks.

“It was easy, because my brother always told me I was going to have to leave Vicksburg at some point in time. I just did it a little earlier,” Martin said of the decision to leave home. “I learned that I’m going to have to grow up and be a man. I’m going to be on my own for the rest of my life, basically.”

Martin had a number of scholarship offers from Division I programs during his recruiting process. He had originally committed to Boston College in September, but de-committed in November about a week after receiving an offer from Kansas State.

Martin said a combination of factors, including the potential to move on to the next level, played a role in his decision.

“The coaching. They talked to me every day. And the fan base. It’s Power 5, so most Power 5 players go to the NFL,” Martin said.

Before he embarks for the “Little Apple” of Manhattan, Kansas, Martin will spend some time back at home. He plans to spend the spring semester at, and graduate from, Vicksburg High. After that, he’ll head to Kansas State and start the next leg of a journey he hopes carries him to the NFL in a few years.

“It’s still going to be hard,” Martin said of the road ahead. “I’ve still got to work hard every day, come to play and compete.”