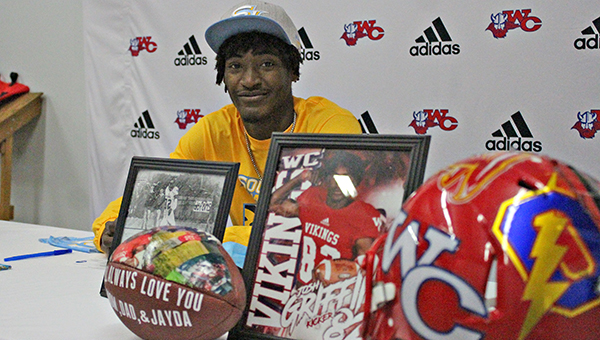 Two years ago, Josh Griffin trudged out to what he was certain would be his last day of football practice. Then a sophomore kicker and punter for Warren Central, he said he simply wasn’t enjoying the game.

“I came to practice one day and I was like, ‘This ain’t it. But I’ll go to the end of practice, do one more day, see how it feels,’” Griffin said.

Griffin’s life changed forever that day — not through some remarkable experience, or outstanding performance, but from the simple act of laughing and having fun. He decided to stick with football, and it wasn’t long before it became the sport that would chart his future course.

Over the next two years Griffin became one of the top kickers in Mississippi, and earned a place on a lengthy list of great ones at Warren Central. On Friday, he even went a step further by signing to play at Southern University in Baton Rouge.

“All the good things would have never happened. It’s just trusting in the process, and everything played out,” Griffin said while reflecting back on his do-or-die practice in 2018. “I didn’t even get in a lot that practice. It was just having fun around all the coaches and players. It was a whole different atmosphere. It was a family thing. Having fun, goofing off, it was something I love now and knew I was going to miss it if I quit.”

Griffin emerged as one of the top kickers in Mississippi during his junior season in 2019. He kicked 12 field goals — one short of tying the single-season Warren County record — and went 19-for-20 on PAT attempts. He also averaged 38.6 yards per punt and recorded touchbacks on 13 of 45 kickoffs.

Griffin was slowed by a nagging leg injury this season, but still went 16-for-17 on PATs and kicked four field goals. He had 16 touchbacks on 26 kickoffs, as well as a 36.1-yard punting average.

“I’m just proud that I stuck with it, because it all could have been gone in one day,” Griffin said. “If I could do it over, I probably wouldn’t do anything different.”

Griffin was selected to play in the Bernard Blackwell Mississippi All-Star Game, which has made for a busy week. He was practicing with the all-star team in Oxford for most of the week, returned home Thursday night, and will play in the all-star game Saturday at 1:30 p.m. at Brandon High School.

The first day of college football’s early signing period was Wednesday, but Griffin’s all-star responsibilities prevented him from signing then. He finally found an hour or so Friday morning to dip into Warren Central’s football fieldhouse to sign his national letter of intent in front of family, friends and coaches.

Griffin said he picked Southern over several offers from Mississippi junior colleges and Division III Monmouth College in Chicago. Besides a full scholarship and a chance to play at a four-year school, Griffin said he liked what Southern had to offer.

“I went down there one time, not for an official visit but just a visit, and I could tell it was my new home,” Griffin said. “Everything about the atmosphere, all the places, the people that greeted me there, I knew that was the place to be.”

Southern, and the rest of the Southwestern Athletic Conference, postponed its 2020 season until spring 2021. Its first game is Feb. 26 at Alabama State. Griffin will graduate from Warren Central in May and thus will not join the team until the summer, in preparation for the 2021 fall season.

He wasn’t sure about his immediate playing prospects. The Jaguars have a senior kicker, Cesar Barajas, but under NCAA rules he would have another year of eligibility if he wants it because of the COVID-19 pandemic.

Griffin said that whether Barajas returns or not, he plans to compete for playing time right away.

“They’ve got a kicker returning, but he’s got a heck of a job to do if he wants to keep his spot,” Griffin said with a grin.

OXFORD — Ole Miss will be without two of its biggest offensive stars for Saturday’s regular-season finale against LSU. Wide... read more