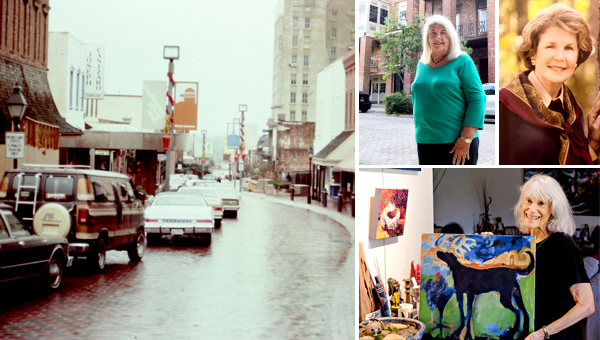 Businesswomen built the foundation for a vibrant downtown Vicksburg

History seems to be at the center of most things in Vicksburg — retail shops in downtown included.

Today, among the dynamic eateries and loft apartments, are retail businesses — many owned by women — who in large part have the work of trailblazers to thank for paving the way for success.

Bobbie Marascalco, who owns Peterson’s on Washington Street, has been in business for 20 years.

“Willingham’s came not too long after,” Bobbie said, with more women-owned businesses to follow including Sassafras and Cinnamon Tree.

Women-owned businesses downtown have continued to grow through the years. When some longtime residents talk about the days when Washington Street was the retail hub, three names come up – Pam Mayfield, Bettye Kline and Lesley Silver.

All three women opened their businesses in the 1970s, at a time when Vicksburg’s downtown was the center of retail activity where merchants offered quality goods and personal service.

Pam opened her business in 1977. It was a women’s clothing store called Top of the Hub and was located on top of the family’s menswear shop.

“My father was building a new building and was using two buildings; one is now the Daiquiri Hub,” she said. “I told him I’d like the second floor to open a women’s shop.”

Pam’s father, the late Mike Jabour, owned The Hub, which opened in 1933.

She even recalled when she and her brother John Wayne Jabour would ride the bus to downtown.

“I grew up in the business,” Pam said, a business where the whole family worked.

“When I was 12, I was gift wrapping. Growing up as children in a men’s store, we were taught to offer service,” Pam said. “Everybody that came in the store was treated as a guest; you would find out what they needed and then find a way to help them get it.”

And using her father’s philosophy, “that everyone was a gift coming through the door,” Pam made sure she gave personal attention to her clientele which reached women beyond Warren County.

Carol Buelow, who worked at Top of the Hub said, “It was fun, it was interesting and we had beautiful clothes. We dressed 22 Miss Mississippis and two Miss Americas. Cheryl Prewitt was the first one we dressed to go to Atlantic City and Susan Aitken a few years later.”

The Top of the Hub was also where women could go for party attire.

“At parties we would go to, you could see very familiar dresses that came from the Top of the Hub,” Carol said, “But we tried to be very careful and kept a book and wrote down what went out to whom, especially if it was a special prom dress or special party dress.”

No woman would want to show up in an outfit someone else was wearing, Carol said, therefore by keeping a record, “We could in many instances tell someone it had already been sold.”

Pam credited the staff for the success of her business.

“I think the people who surrounded me made me successful,” Pam said. “They came with fresh ideas every day. Each one of them had their own talent. Each one of them brought to the table  something different and we’re all friends to this day. It wasn’t something that went away after we left.”

The late Bettye Sue Kline opened the Bettye K in 1970.

Stan Kline, Bettye Sue’s husband, said the first location of her shop was at 1318 Washington St. Paper Plus is now located there and is owned by Mary Helen Welch.

In 1977 the Bettye K was moved to 1305 Washington St. The building now houses Willingham’s, a women’s clothing and gift shop that is owned by Barbara Willingham.

“Downtown was the center of shopping in the 1970s and 80s,” Stan said, and his wife wanted to be in that environment.

Like the Top of the Hub, Stan said Bettye K’s clientele reached outside of the Warren County community.

“She (Bettye Sue) had a great customer base from Louisiana, Jackson; all over Mississippi,” he said.

When the Bettye K moved into its second location on Washington Street, Stan said, it had two floors with each serving different markets.

“The first floor primarily was for business attire, sportswear and designer clothing with accessories,” he said. “The second floor was dedicated to bridal, prom and cocktail attire.”

The bridal department, Stan added, included a consulting service to help a bride and her family plan the ceremony. Most often, Bettye Sue served as the wedding director.

“I went to many a rehearsal dinner,” Stan said.

Bettye Sue’s employees, like Pam’s, Stan said, were a valuable asset to the success of the business.

In a letter written by Bettye Sue, upon her closing the doors to her business in 1995, she wrote, “Numerous people have served on the staff of Bettye K sharing their talents to assure successful seasons for a quarter of a century. The people I have worked with and the people I have done business with have graciously made me a part of their lives. My greatest wish is that these bonds of friendship will endure and that we will all share the future together with pleasant memories of Bettye K.”

Lesley Silver opened the Attic Gallery in 1971, on the second floor of what was Versil’s, a jewelry store owned by her former husband’s family.

“It was two buildings with a walkway between,” Lesley said. “You could walk from one building to another without going outside.”

The building is now home to Sassafras, a gift shop owned by Nancy Bullard.

The Attic Gallery, which features Southern folk art, contemporary fine art and handmade pottery and jewelry, moved in 1997 to its present location, 1101 Washington St., which is above the Highway 61 Coffeehouse.

While considered trailblazers, Pam, Bettye Sue and Lesley were not alone.

“A lot of these stores on Washington Street were women’s stores; the man was in the background,” Stan said. “He might have handled the bookkeeping but the women made the decisions.”

Below are the hundreds upon hundreds of Letters to Santa received and typed in by a few of The Vicksburg... read more