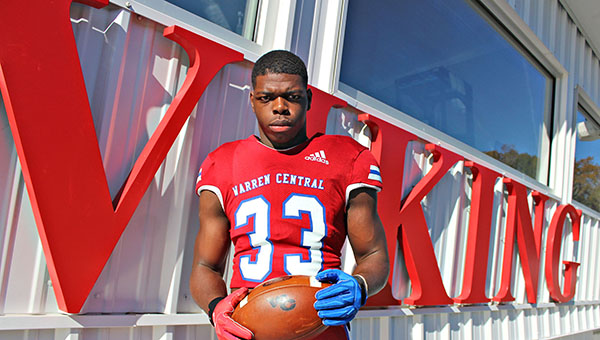 For two seasons, Taylen Smith made his name by sacking the quarterback and preventing touchdowns. So, when he found himself running toward the goal line with the football in his hands, the phrase, “Act like you’ve been there before” did not really apply.

The Warren Central defensive end did a forward flip into the end zone to finish off the touchdown and create a highlight that will last forever.

“That was not planned,” Smith said with a laugh. “Once I got past the quarterback and I saw (teammate Jashun Simon) on the side of me and there was nobody else, I got excited. I flipped and somehow I landed it. It blew up from there. I have never landed a flip, back flips or nothing. I landed it and turned around and was like, ‘Dude!’

“Jashun came and he tackled me and everybody fell on me. It was fun,” Smith continued. “It was just different. Once you loosen up and play the game, it’s a wonderful thing.”

That interception return against Brandon back in September was Smith’s biggest highlight, but far from his only one. He repeated the feat two weeks later against Germantown — minus the flip — and racked up eight sacks and 12 tackles for loss this season.

The versatile senior was also a run-stopper and could drop back in coverage as easily as he could blow past an offensive tackle. He was one of the primary drivers of one of the best defenses in Mississippi, which also made him the 2020 Vicksburg Post Defensive Player of the Year.

“It means a lot to me this year,” Smith said. “Just from everything that has gone on, to have a good season and be recognized for different accolades and all that, it shows that if you work hard at something and you love to do something, and keep going and keep driving it can lead you anywhere.”

Smith had a great season in 2019, recording 50 tackles, six sacks and 18 tackles for loss, but worked hard in the offseason to expand his skillset. He improved his speed to not only be able to get a quicker burst as an edge rusher, but to be able to drop back in pass coverage as needed.

He finished this season with 53 tackles — in four less games — while increasing his sack total from six to eight.

“I felt this year I got faster. I had to get faster. The game was only getting faster and you had to get faster,” Smith said. “One thing I prioritized all summer was getting faster, and bigger and stronger, so I can be able to keep up with the linemen and wherever the coach wanted to put me at I would be able to have the speed and strength to play.”

“We dropped him in coverage, we’d send him on blitzes,” Morgan said. “He’s a dedicated young man. You want to see jumps from their junior year. You don’t want them to be that same player their senior year. He took it upon himself to improve, and improve he did. He’s just a versatile player, a productive player, and a difference-maker. He helped us win a lot of big games.”

Smith wasn’t all about athleticism, however. He showed with his only two interceptions of the season that he could also be smart and savvy.

In a 23-3 win over Brandon on Sept. 11, Smith rushed the quarterback like usual but then took a step back and deflected the pass into the air. He caught it and ran 29 yards for his first career touchdown, finishing it with a flip across the goal line.

Two weeks later he pulled off a nearly identical play against Germantown, again batting a low pass into the air and returning it for a 7-yard touchdown that was a key play in a 23-10 victory.
The second time, Smith said with a smile, he made a point to be more restrained with his celebration.

“I wanted to (flip). But certain points in games you have to act like you’ve been there before and show class,” he said.

After the Germantown game, Smith said both touchdowns were the result of film study and noticing the low passing angles of the two quarterbacks. Morgan joked that he’d have to get Smith to teach it to his teammates.

“We’ll have to bring him back to run some camps or something and show everybody how to do that,” Morgan said.

Smith added that he enjoyed scoring the two touchdowns more than his 14 career sacks.

“It’s the touchdowns,” he said with a laugh. “You get a sack and it’s like, ‘OK.’ But when you get a touchdown it’s more noticeable than a sack. There’s just something about a touchdown. Plus, it’s the only two I ever had.”

The football future of the 6-foot-1, 200-pound Smith is uncertain. His college offers so far are mostly from Mississippi’s junior colleges. He plans to sort through them over the winter and make a decision during the February signing period. He believes, however, that this season shows he can be a valuable part of a college defense and play at the next level.

“It’s just a mindset now. Once you can keep up with people in your league, and in 6A, and the best of the best in high school football, there’s no doubt in my mind I can keep up with them at the college level,” Smith said. “I think I showed the coaches I can do more than just rush. When I played linebacker, it showed I had the ability to make plays at linebacker as well as get down and get dirty at D-end.”

In the meantime, he’ll celebrate a hard-earned honor as the Vicksburg Post’s 2020 Defensive Player of the Year. Smith is the third consecutive Warren Central player to win the award, but only the second defensive lineman since 2001 to get it. Vicksburg High’s Jomon O’Neal won it back in 2015.

“It’s a big accomplishment. Just the hard work I put in throughout the season and before the season, it’s paying off now,” Smith said. “My pops told me to work and everything would come to you. Everything fell into place this year.”

NEW ORLEANS (AP) — Alvin Kamara expects a fine for wearing a pair of Christmas-themed shoes that, as it turned... read more