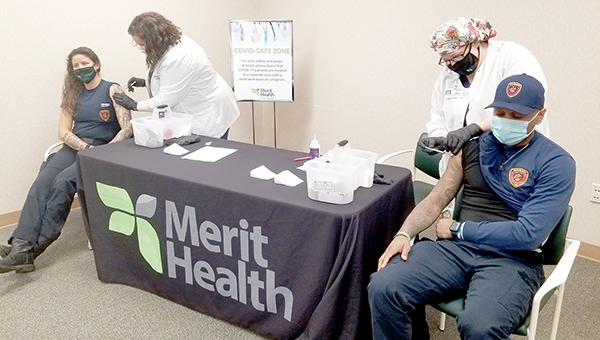 In the nine months since the first case of COVID-19 was confirmed in Warren County, 2,566 cases have been confirmed, and in some cases, the first medical treatment those patients received was at the hands of emergency medical personnel with the Vicksburg Fire Department.

Monday, dozens of those first responders began receiving their first shots of the COVID-19 vaccine at Merit Health River Region.

Vicksburg Fire Chief Craig Danczyk said more than 40 of the department’s personnel would receive their shots in shifts through Wednesday. He also said more personnel are likely going to take the vaccine in the coming weeks.

The priority, Danczyk said, was to ensure the department’s emergency medical personnel were given additional protection as they deal with an increasing number of calls connected to the spread of the COVID-19 virus.

“A lot of people do not realize the Vicksburg Fire Department provides the ambulance service for all of Warren County, and we are seeing elevated call volumes and some of that increase is because of COVID,” Danczyk said. “In our response, and because of the spread of the virus, our employees have more risk. We are doing everything we can to minimize that risk with additional (personal protection equipment), gowns, gloves, face shields and other items depending on what the crews are dealing with. The vaccine is just another part of that effort to minimize risk.”

The vaccines to first responders come less than two weeks after some of the hospital’s frontline medical personnel began receiving their first rounds of the vaccine.

“Merit Health River Region is proud to vaccinate our Vicksburg Fire Department first responders. We are excited to be able to provide an additional level of safety for those who work tirelessly to keep our community safe. First responders are part of the first phase of the COVID-19 vaccination allocations as recommended by the (Centers of Disease Control) and the Mississippi State Department of Health,” the hospital said in a statement following the vaccinations Monday. “Vaccination is an important step in helping to prevent COVD-19 and its potentially devastating consequences.”

Danczyk was among the department’s personnel receiving the shots Monday and said the experience was “far better” than he expected.

“It was the best shot I have ever had. I generally do not like needles, but this was almost painless,” he said. “For those who have concerns about needles, this shot is better than you realize and less painful than you realize.”

Study: Kids get virus at gatherings more often than school

JACKSON (AP) — Children are more at risk of contracting coronavirus at a social gathering than in a classroom or... read more