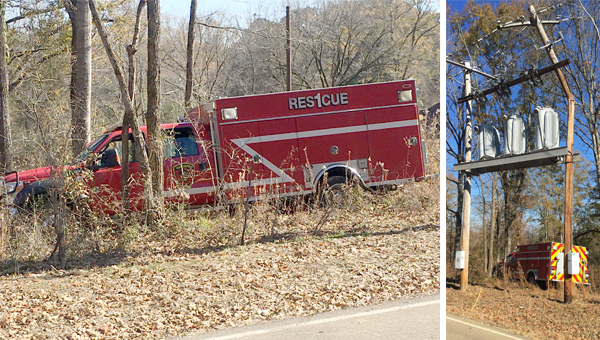 Nailor Road, between Goodrum and Hilton roads, was closed for a number of hours Tuesday emergency units and power crews with Entergy responded to a single-vehicle accident that knocked out power to hundreds of homes.

Just after noon Tuesday, a rescue vehicle with the Vicksburg Fire Department — Rescue 1 — reportedly lost control and struck a power pole along Nailor Road. Rescue 1 was responding to a medical call in the area.

Vicksburg Fire Chief Craig Danczyk said the vehicle reportedly developed an issue with its brakes before leaving the roadway and striking a power pole, splitting the pole in two. A transformer on the pole also fell. Additional damage to nearby transmission lines was also caused as pressure was placed on the power lines.

According to Entergy’s online outage report, more than 800 customers lost power for a little more than two hours. Power was restored just after 2 p.m. as Entergy rerouted power around the damaged area.

Danczyk said the driver and crewmember of Rescue 1 were not injured and returned to service. Materials and equipment from Rescue 1 were transferred to Rescue 2. The damaged vehicle, a Ford F550, was significantly damaged and was being towed from the scene.

Warren County Sheriff Martin Pace said that the road was reopened at 2:45 p.m., but will be closed again when Entergy’s begins making permanent repairs to the damaged lines, poles and transformers.

While the headlines were dominated in 2020 by the havoc created by the COVID-19 virus, there were stories that made... read more