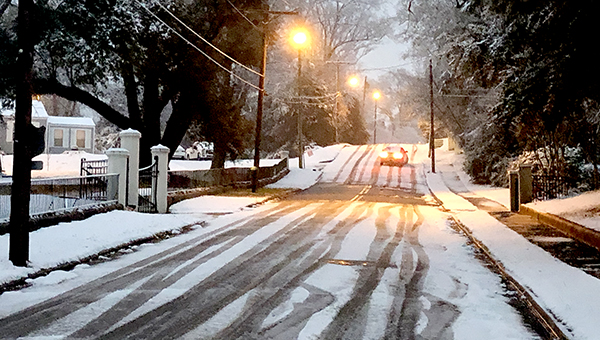 A car struggles to get up the hill on Mulvihill Street early Monday. Overnight snow and freezing temperatures made driving in some parts of Vicksburg and Warren County difficult. (Catherine Hadaway/The Vicksburg Post)

Only a handful of weather-related wrecks and no power outages were reported during the storm that began Sunday night and continued through Monday morning.

While subfreezing temperatures following the storm Monday night caused concern of icing on area roads and bridges among local officials, no problems were reported Tuesday morning as people returned to work and county public and private schools resumed classes after the one-day vacation.

“I only heard of one wreck on Oak Ridge Road (Tuesday morning); we did not have very many wrecks over the past couple of days,” Warren County Emergency Management Director John Elfer said Tuesday. “I think everybody heeded the warning and stayed home. It’s (the snow) pretty much all melted now.”

Alan Campbell, a meteorologist with the National Weather Service Office in Jackson, said between one and four inches of snow fell in Warren County, with measurements varying by location.

According to preliminary reports to the National Weather Service, Bovina reported getting two inches of snow, with four inches reported in Vicksburg about one mile west of Culkin. Two inches were reported in an area one mile northeast of Vicksburg and 3.5 inches fell in the Eagle Lake area.

Campbell said the 2-inch snowfall met the criteria for the winter storm warning the Weather Service issued for Warren County on Sunday. He said more accurate snow totals will be released in the next two days. Much of the snow remained on the ground as the sunset Monday.

North Ward Alderman Michael Mayfield, who is over Vicksburg’s public works department, was concerned Monday afternoon that city streets on hills, which froze over Monday during the snow might be in the same condition Tuesday.

Tuesday, however, he said reports from Vicksburg police indicated everything was in good shape.

“All roadways and hilltops are clear of ice and debris,” he said.

Road crews were up early working to ensure city streets and county roads were passable.

“We had few problems,” Pace said Monday. “We had some limbs down on the roads, but county road crews quickly got them off the road. None of the county roads are closed.”

“Everything was in good shape,” Mayfield said Monday afternoon. “I was really well-pleased with our city employees and the street department crews did a good job getting the roads open, and the crews from the Mississippi Department of transportation did a good job keeping I-20 open.”