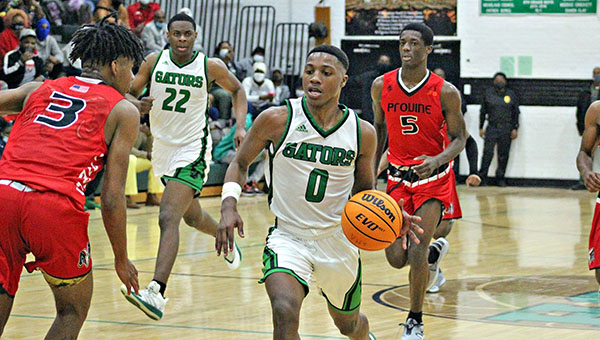 With every missed free throw, turnover and wasted possession, the Vicksburg Gators tried hard to gift Provine a win.

Provine simply refused to take it.

Provine missed four shots in the final minute, including a 3-pointer at the buzzer, to allow Vicksburg to escape its own string of game-ending follies and earn a 42-41 victory Tuesday night.

Vicksburg missed two free throws in the final minute, both on the front end of two one-and-ones, and committed a turnover as well. Despite its struggles to close out the game, Vicksburg coach Kelvin Carter said it was a good test for his team.

The Gators (10-6, 2-2 MHSAA Region 4-5A) led by 10 points at the end of the first quarter, but that soon evaporated and the game was close throughout the second half. A split pair of free throws by Lacaris Johnson and a basket by Keshawn Brown put the Gators ahead 42-39 with two minutes to go, and the game turned into a string of missed opportunities for both sides the rest of the way.

Javion Watkins hit a floater with 23.2 seconds to go to pull Provine within a point. After a Vicksburg turnover, however, he missed a shot under the goal and then had a putback attempt blocked by Jaden Williams.

“Jaden’s been solid all year. He’s growing, he’s getting better, he’s just got to be more aggressive offensively and look to score a little more when he’s got the little guys on him. It’s been very gratifying to see those guys play defense like we know how to play defense.” Carter said.

Kameron Brown missed the front end of a one-and-one with 4.7 seconds to go to give Provine one last chance. The Gators defended the inbounds play well, however, and Samarion Grant’s off-balance 3-pointer at the buzzer was off-target.

Grant finished with 17 points for Provine, while Watkins and Tristen McGee had six apiece.

Taylon Smith led Vicksburg with 19 points, with most of it coming via six 3-pointers. Williams finished with nine points and Kameron Brown had seven.

No matter how they got there, scratching out the victory was huge for the Gators. They have already lost twice to Region 4-5A frontrunner — and perennial state championship favorite — Callaway, and are trying to avoid a third meeting in the first round of the region tournament next month. Now they’ll likely only need to win one of their last two region games against Ridgeland on Friday night or Provine on Jan. 29 to avoid that fate.

“That’s very big, because now we’ve got eyes on Ridgeland,” Carter said. “If you can seal that second place up you’re going to end up seeing Ridgeland or Provine again, but it’s very important to get that win. This is district time and we know how tough it is against Callaway, so against these other guys you have to capitalize night in and night out.”

Mason Moore added 17 points for Simpson, all in the first quarter. Moore hit three 3-pointers as Simpson raced out to a 40-6 lead. It led 58-12 at halftime.