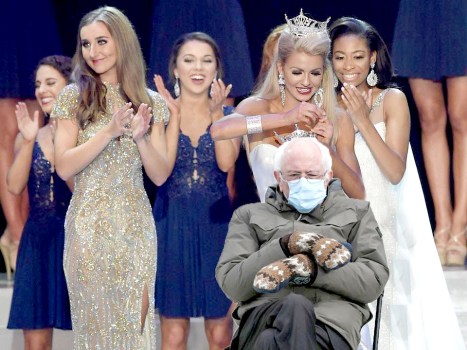 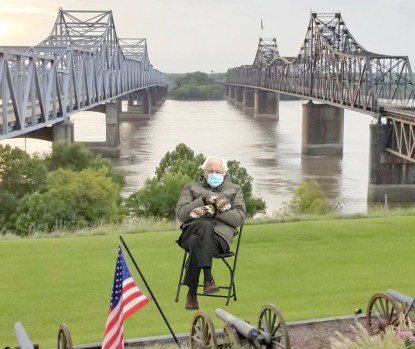 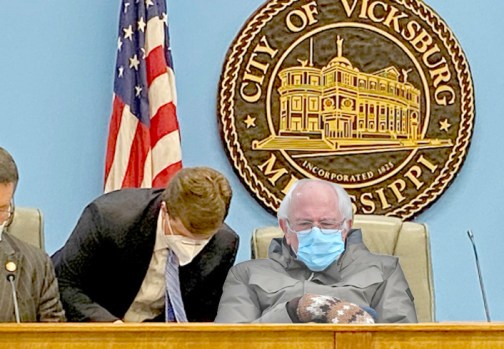 Bernie Sanders sitting in for Mayor George Flaggs Jr. during a recent Board of Mayor and Aldermen meeting. 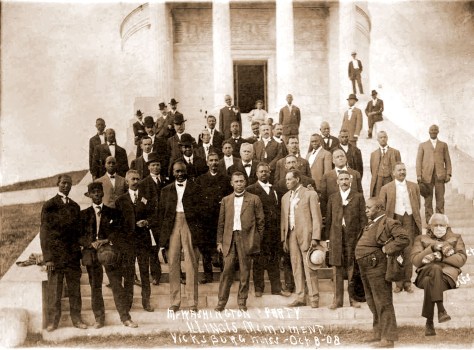 Bernie Sanders among those visiting the Illinois Monument in the Vicksburg National Military Park with Booker T. Washington in October 1908. 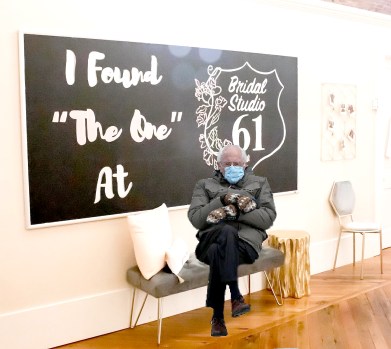 Bernie Sanders looking for 'the one" at Bridal Studio 61. 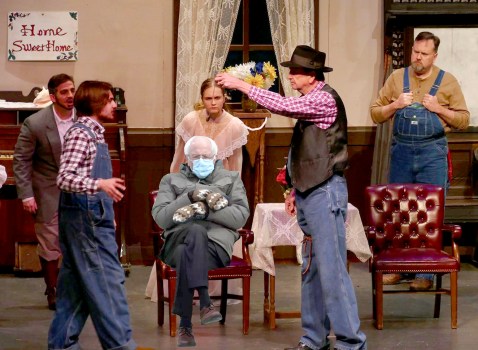 Bernie Sanders taking part in the production "Gold in the Hills." 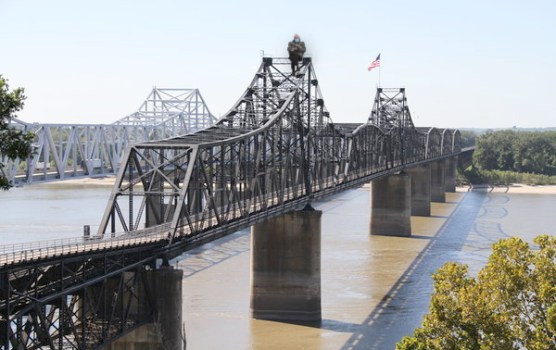 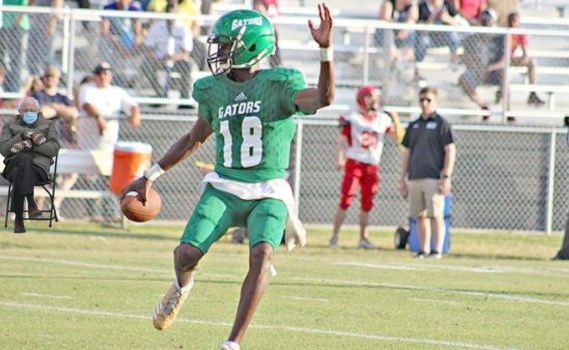 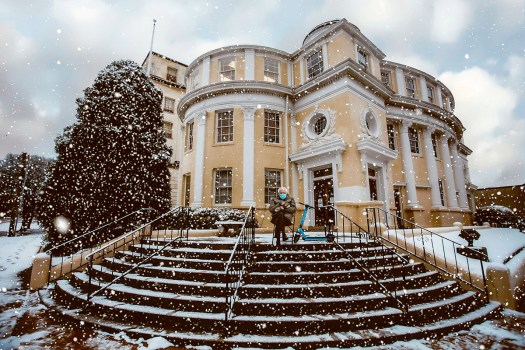 Bernie Sanders enjoying the recent snow in Vicksburg from city hall and looking to take a Blue Duck scooter out for a ride in downtown. 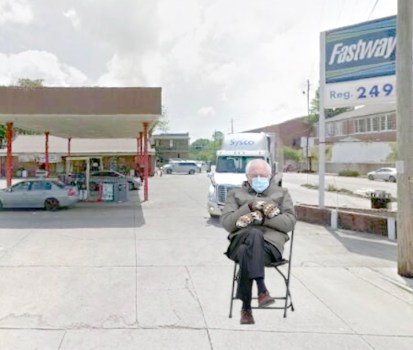 Bernie Sanders filling up on fuel and chicken at Fastway. 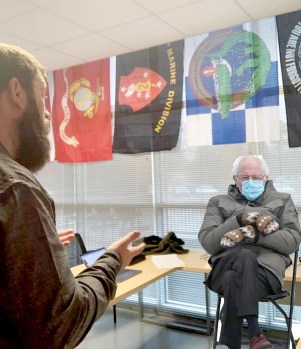 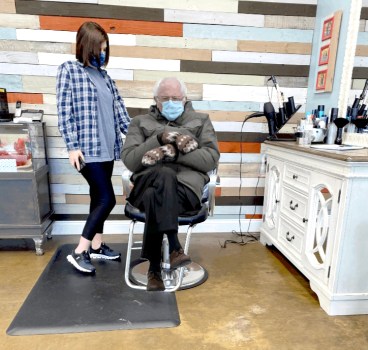 Bernie Sanders getting a hair cut at Split Ends. 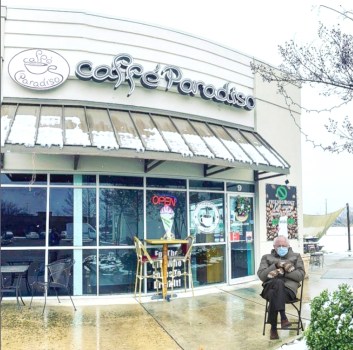 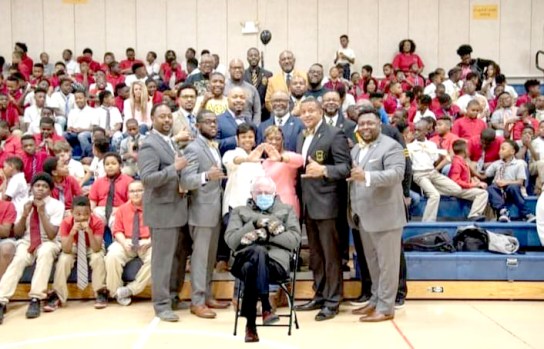 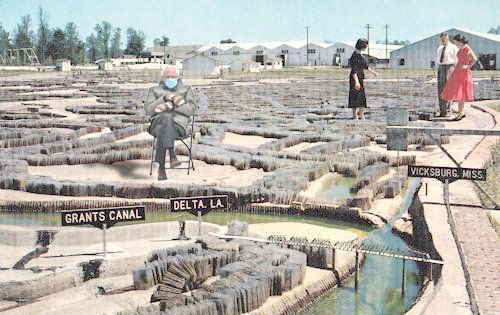 Bernie Sanders looking over the model of the Mississippi River. 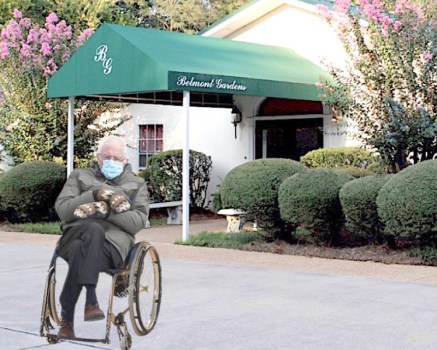 MONTPELIER, Vt. (AP) — Wearing mittens made out of recycled materials and a warm winter jacket, U.S. Sen. Bernie Sanders pulled off a casual inauguration outfit — and vibe — that only he could.

Many people quickly highlighted the 79-year-old independent Vermont senator’s look, and created endless memes, from Wednesday’s inauguration of Joe Biden and Kamala Harris, which he said was more about keeping warm than fashion.

“You know in Vermont, we dress warm, we know something about the cold, and we’re not so concerned about good fashion, we want to keep warm. And that’s what I did today,” Sanders told CBS on Wednesday.

People were particularly enthralled with Sanders’ mittens, which were made by a Vermont elementary school teacher who has a side business making mittens out of recycled wool.

“I love it that he loves them and that he wears them,” Jen Ellis, an elementary school teacher, said. “And I’m totally honored that he wore them today.”

Ellis has never met Sanders. But when her daughter went to a child care center owned by one of his relatives, she was able to slip a pair into Sanders’ hands.

“I think people like a heartwarming story — especially now,” she said when asked about all the attention the mittens were getting on social media.

The widespread interest in the mittens prompted Ellis to tweet Wednesday that there were “no more” of the coveted hand warmers.

Sanders has donned the mittens before while running for president in 2020 and in interviews with Vermont journalists, the station reported.

Sanders’ inauguration look, including a brown winter jacket made by Burton snowboards, has spawned countless memes since Wednesday including the former presidential candidate on the subway, on the moon, sitting on the couch with the cast of “Friends.”

In memes spreading across Indian Country, Sanders is draped with a Pendleton blanket sitting alongside the parade route during a tribal fair, next to the fire during a ceremony and riding in the back of a pickup truck across remote land. Even before inauguration day, he was dubbed “cheii,” the Navajo word for “grandfather.”

Readers of The Vicksburg Post responded to a call the newspaper made, asking for residents to submit memes of Sanders placed in settings throughout Vicksburg and Warren County.

“We thought it would be a fun way to involve our readers in the all the hoopla around the viral meme,” Post editor Tim Reeves said. “Our community has some tremendously talented individuals and they did not disappoint.”

Ryan Leclerc, a hard goods buyer for Onion River Sports in Montpelier, Vermont, said Sanders is more about substance than style. Leclerc noted the senator’s inauguration attire emulated what is “great” about him.

“Those are the mittens you might see when you’re sipping cider around a fire. Sanders doesn’t care and it’s not important to him,” Leclerc said.