Profile 2021: The connection between Vicksburg and her ship 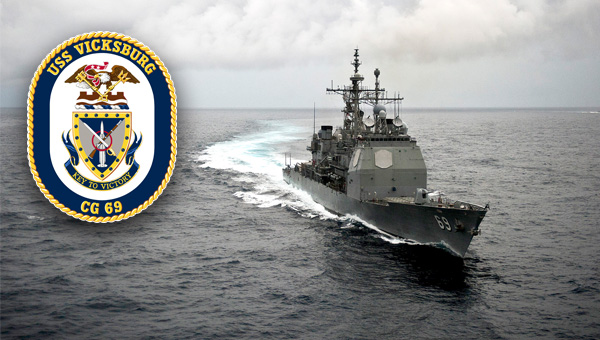 In March 1990, the keel was laid at Ingalls Shipbuilding in Pascagoula for a Ticonderoga Class cruiser named the Port Royal.

Two years later, in November 1992, Tricia Lott, wife of then-U.S. Sen. Trent Lott and the ship’s sponsor, watched the commissioning of the cruiser USS Vicksburg, named for the battle of Vicksburg in 1863.

The cruiser is the fourth in a line of ships to bear the name Vicksburg. All three predecessors saw combat.

The first Vicksburg was a wooden steamer converted to a Union screw gunboat that served from 1863-1865. Then there was the Vicksburg II, a gunboat that fought in the Spanish-American War, and the light cruiser Vicksburg that saw action in World War II in the Pacific during the invasions of Iwo Jima and Okinawa.

The history of the present Vicksburg’s namesake is not lost on the crew, said its skipper, Capt. David Snee, a Tennessee native and graduate of the University of Memphis.

“The officers and senior enlisted sailors know about the battle,” he said. “The younger sailors learn about it during their orientation when they come on board the Vicksburg. They get into a more detailed version of the battle when they compete for their surface warfare pins. Knowing more about the ship’s namesake is required as part of earning the surface warfare pin.”

There are other ways the crew is reminded of the battle, Snee said. The ship’s motto is “The Key to Victory,” the words used by Abraham Lincoln to describe Vicksburg.

“There is a display case in the ship’s wardroom that has artifacts, a painting of the battle on the quarterdeck, and a brass panel that talks about the Vicksburg and the other ships that have carried the name of Vicksburg,” he said.

The ship’s bell, he said, is from the World War II cruiser Vicksburg.

When he learned he was assigned to command Vicksburg, Snee said, he had to better educate himself on the details of the battle.

“I was familiar with the battle, but I did not know much about it,” he said. “When I was given command of Vicksburg I had to learn more about it. I had some books by Shelby Foote — I’m a big Shelby Foote fan, and his books were required reading at Memphis, so I was glad to go back to my old history books.”

Before the COVID-19 pandemic hit, Snee said, he and some of the ship’s officers were to travel to Vicksburg to visit the city and the Vicksburg National Military Park.

“That’s something I hope we can do once the pandemic ends,” he said.

Presently, Snee said, most of the ship’s artifacts and items related to the battle are in storage as the Vicksburg undergoes a major upgrade at Naval Station Norfolk, Va., to extend the life of the Ticonderoga Class cruiser for another 10-15 years to give designers the opportunity to design the new class of cruiser.

Norfolk has its own Civil War history; it’s where the CSS Virginia, also known as the Merrimac, was built.

During the upgrade process, the Vicksburg will have the Navy’s Smart Ship technology installed and get the newest version of the Aegis Air Defense system.

The Vicksburg isn’t the only ship going through the upgrades. A sister ship, the USS Gettysburg, is undergoing the same work. Snee said the situation has led to some competition between the officers and crew.

But once the work is completed, Snee won’t be the captain taking Vicksburg back to sea. The upgrade will be completed late in the year and his tour as captain of Vicksburg ends in June.

Williams sets high expectations for her students and their…