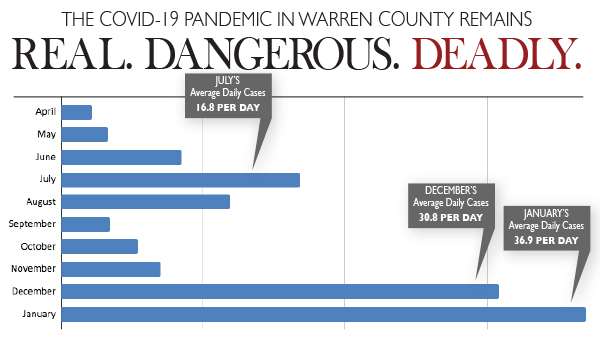 Sunday marked the final COVID-19 report for the month of January from the Mississippi State Department of Health. And, in doing so, marked the final chapter in a horrific and deadly month for Warren County in its ongoing war against the virus.

The number of new cases easily outpaced December as the worst month, and the deaths surpassed August and December, which both had registered 21 deaths.

By every metric and measurement, January was far and away the worst month Warren County has experienced since the virus’ outbreak hit the county on March 29.

Dr. Dan Edney, with Medical Associates of Vicksburg, who serves on Gov. Tate Reeves’ COVID-19 task force, said the surge of cases in December, and especially in January, are tied to the holidays.

“We have seen a lessening in the number of new cases, but the Christmas surge was vicious both in numbers and intensity,” Edney said in an interview with The Post when the number of cases in January surpassed 1,000 last week. “We are still seeing deaths each day related to Christmas transmission. That will continue at least another week or so.”

Sunday, Edney said the numbers are also connected to what he said was “complacency with regular guidelines.”

Both the city and county continue their COVID-19 civil emergency orders, which both require face coverings in businesses and public buildings. The city’s order is more stringent, requiring temperature checks of employees and guests at restaurants and face coverings outdoors when social distancing is not an option.

Monday, the Warren County Board of Supervisors are expected to extend their civil emergency orders through at least March 1.

Monday also marks the first day of a drive-thru COVID-19 vaccination site set up through a partnership between the Mississippi State Department of Health and Warren County Emergency Management. Last week an estimated 1,200 appointments — slated for Monday, Wednesday and Friday — went quickly, in some cases blocks of appointments were filled in less than 20 minutes after opening up online.

“The current daily new case level is related to the large amount of community transmission that occurred over Thanksgiving and Christmas and lack of adherence to guidelines by so many,” Edney said last week. “But, hopefully, with the vaccination rates going up and the number of COVID recovering patients with current antibody levels in the community, we should see a decline soon.”

Through Sunday, Warren County has now reported 3,888 cases of the virus and 109 deaths.

Mike Calnan has been involved with the Vicksburg Theatre Guild for 20 years. He is also a member of the... read more