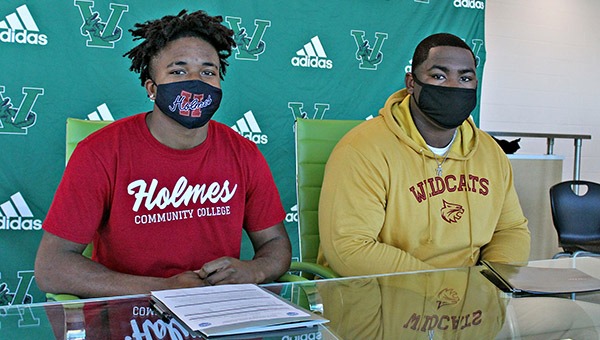 Two Vicksburg High football players turned the page to the next chapter of their lives.

Quarterback Sha’Kori Regan and defensive lineman Michael Montgomery both signed with Mississippi junior colleges in a ceremony at the school on college football’s national signing day. It was a time for both to reflect on the long journey to get to this point, as well as dream about the bright future ahead.

“It’s a long journey, but life goes on. You can’t stay and play high school ball forever. It’s going into a new world. It’s bittersweet. It moves by so fast you don’t even recognize it. I should have enjoyed the moment while I could instead of taking it for granted,” Regan said. “Not all of the players make it past high school. Some of our football players’ careers ended in November. It’s a blessing moving up.”

Regan was the 2020 Vicksburg Post Offensive Player of the Year. He moved from quarterback to running back early in the season and finished with a Warren County-best 1,002 yards and eight touchdowns in only eight games.

He was excited about the opportunity to play at Holmes, which runs a Wing-T offense similar to the one Vicksburg ran last season. Regan, who threw for 1,277 yards and 12 touchdowns in 2019, wasn’t sure whether he’d play quarterback or running back at Holmes.

“They were my first choice. They gave me a chance,” Regan said of Holmes. “They run Wing-T also, and all they do is run the ball.”

Montgomery also played multiple positions in high school, on both the offensive and defensive lines. He was recruited to Pearl River to play defensive tackle and reunite with a familiar face — Lorenzo Breland, who was Vicksburg’s head coach in 2017 and is now the defensive line coach at Pearl River.

“I just like getting nasty in the trenches and hitting people,” Montgomery said.

A moment earlier, Montgomery was a little more philosophical about the opportunity to play at the next level.

“It feels good. I’ve worked hard all my years of high school, and I finally get a chance to play ball at the next level. I feel great about the opportunity,” he said.

“Football is a dangerous sport, and I don’t want to put a hex on his head, but if Mike stays the same person that he is he can make money on Sunday,” McDaniel said, referring to the NFL. “A lot of universities have missed out. I have coached All-American players and all-staters, and Mike is by far some of the best talent I’ve ever had.”

Vicksburg High had plenty of talent this season. Although Regan and Montgomery were the only two players to sign on national signing day, McDaniel said they won’t be the last from this class to do so.

Running back Laurence Sullivan plans to sign with East Mississippi Community College this weekend, and kicker Chris Williams has committed to Millsaps College. As an NCAA Division III school, Millsaps does not offer athletic scholarships and thus Williams cannot actually sign a letter of intent to play for them.

Two other players, wide receiver Keveon Smith and linebacker Tommy Curtis, are also weighing junior college offers and are expected to sign in the coming days.

“It’s great watching these guys further their education and being able to move on to bigger and better things,” McDaniel said. “We have three or four other guys that are probably going to sign during the signing period. This is just the first day. The future is extremely bright here at Vicksburg High.”

From players to managers, junior colleges to four-year schools, and even a special guest appearance by a former star, Warren... read more