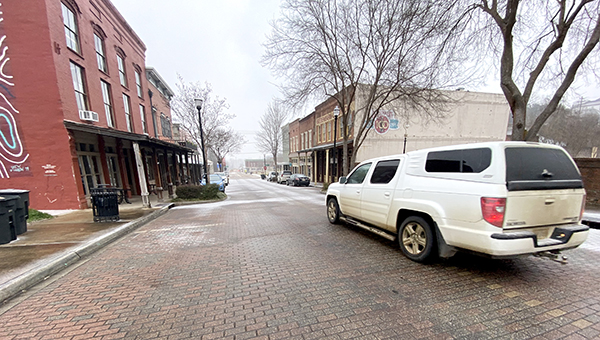 A car heads north on Washington Street Sunday afternoon as freezing rain falls. As of 5 p.m. Sunday, a number of streets within downtown Vicksburg have already been closed due to icy conditions. (Tim Reeves/The Vicksburg Post)

Warren County residents can expect to see a wintry mix starting at midnight and continuing through early Tuesday morning, a meteorologist for the National Weather Service office in Jackson said.

Sleet and freezing rain hit the area early Sunday afternoon, coating cars in ice and the ground in white.

He said the coldest air will arrive Monday night, when temperatures are expected to dip down to 10 degrees.

“We won’t get above freezing until Wednesday afternoon when we have a high of 40,” Tarver said.

Warren County Sheriff Martin Pace said icy road conditions have been reported county-wide, and while most of the county’s well-traveled roads were passable, that condition could change if the area gets the freezing weather that it is forecast.

Also, he said, roadwork on Allandale and Fairways roads have traffic down to one lane.

“We had some pretty good sleet earlier,” Warren County Sheriff Martin Pace said. “We’ve had some minor wrecks where cars have run off the road, but no serious injuries.”

Pace urged residents to stay home during the storm, and exercise extreme caution if they must go out.

“People need to stay inside and not get out on the road if they don’t have to,” Pace said. “Essential workers who have to go to work should exercise caution and drive slower than usual and approach every bridge and overpass as if it is iced over.”

Mayor George Flaggs Jr. said all of the city and county agencies are working together in response to this storm.

“I will continue to monitor the severe weather conditions in our area over the next 48 hours and have been in contact with the National Weather Service, Warren County Emergency Management Director John Elfer, Warren County Board of Supervisors President Dr. Jeff Holland, Vicksburg Police, Fire, and Public Works Departments,” Flaggs said. “As we sand down streets and bridges, I’m asking everyone in Vicksburg to stay in unless it is an absolute emergency.

“The safety of our citizens will always be our first priority.”

Vicksburg Fire Chief Craig Danczyk said he saw a lot of traffic on the road earlier Sunday, and said people need to get off the roads.

“The roads are deteriorating minute-by-minute,” he said. “People need to go home and shelter in place.”

Danczyk said he has added more firefighters to each shift at the fire department to handle emergencies that may arise.

Erin Buchanan, a spokesperson with the Louisiana Department of Transportation, said crews are continuing to monitor and treat the Mississippi River Bridge to ensure it remains open throughout the storm.

Earlier in the day Sunday, Mike Flood, a spokesperson with the Mississippi Department of Transportation, said the agency had more than 200 crewmembers working in the Jackson metro area — of which Vicksburg is a part — treating roads, bridges and overpasses with salt, slag and sand. Crews are working 12 hour shifts through at least Wednesday.