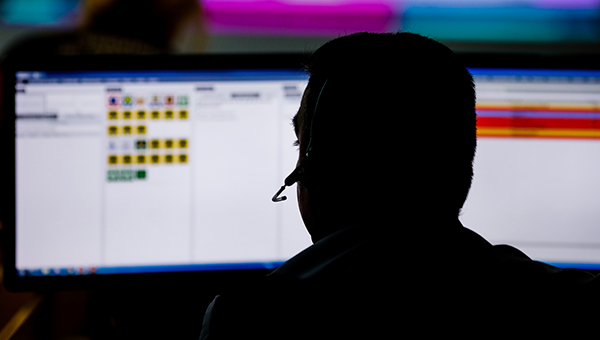 The winter storm hit Warren County late Sunday night and, since then, Vicksburg-Warren 911 has received more than 500 calls for help from county residents.

He said the center’s day shift that worked Monday spent the night at the communications center and began a new shift at 4 a.m. Tuesday.

Warren County Sheriff Martin Pace said the biggest problem in the county is Interstate 20, where the weather has caused traffic problems as 18-wheelers continue to try and negotiate through the icy roads.

“Interstate 20 is a parking lot,” Rufus said, adding he stayed with an 18-wheeler for four hours Tuesday until a wrecker came to assist.

In other areas of the county, Pace said, there is very little traffic as people are heeding the warning from local officials to stay inside and off the roads.

Vicksburg Public Works Director Garnet Van Norman said city crews have been unable to sand and slag roads and bridges because of the ice.

“There’s not much we can do, we can’t get down roads,” he said. “We’re trying to help the police and fire departments as best we can. We’ve got some four-wheel-drive vehicles; I lent my four-wheel drive to (police Sgt.) Bobby Jones.”

While the city’s street crews were helping the police and fire departments, the city’s water mains department was called to fix a broken 6-inch line at Hillside Drive and Buena Vista Drive, water and gas superintendent Dane Lovell said.