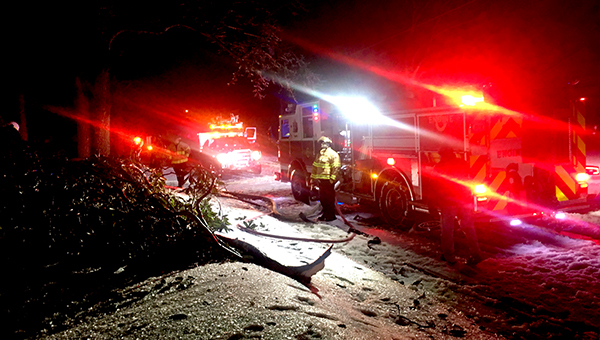 The calls for help have more than tripled and the treacherous winter conditions have caused a flood of problems and new challenges for firefighters throughout Warren County.

Earlier in the week, the Vicksburg Fire Department had to break out snow chains for its fleet of vehicles to allow them to navigate frozen hills in the city. And late Wednesday and into Thursday, a loss of water pressure in the city put another strain on firefighting efforts.

“Some hydrants will not have full pressure, but our pumpers carry with them 750 gallons in their tanks, and a normal response of trucks to a fire brings 2,000 gallons of water to start,” Vicksburg Fire Chief Craig Danczyk said. “And, we have coordinated with Warren County Fire Coordinator Jerry Briggs, that if we have something large and need water, and our system is not at that level, they said they would send a tanker.”

That strong working relationship between city and county was put into action in 2017 when a main waterline break in Vicksburg left the city without water and water pressure for days.

“As Mayor (George) Flaggs has said, ‘relationships matter’ and the relationship between Vicksburg Fire and county fire is strong. I think city residents should have peace of mind that we have it covered,” Danczyk said.

Wednesday night, Vicksburg Fire responded to a house fire on Vicklan Street, where a tree fell into a powerline that damaged the weatherhead of the home. The link sparked, which ignited a fire in the eaves of the house.

Responding units used a large fire extinguisher to douse the flame on the outside, while firefighters worked inside to check for additional flames and hot spots.

“The house was damaged but can be repaired,” Danczyk said, adding that fire is indicative of the type of threat this type of winter weather poses. “You do not expect to have a winter storm like this, trees falling, limbs falling, all kinds of things are going to happen like Wednesday night, you just do not know when and where.”

Briggs said county fire units responded to one house fire late Wednesday and another Thursday, both related to the use of home generators.

Late Wednesday, units responded to a fire on Monterey Drive, where a generator had sparked a fire. The one Thursday, on Tucker Road, was less severe, but also connected to the use of a generator.

Briggs said the weather conditions and poor road conditions have hampered the response time by some departments.

“The road conditions have greatly reduced our response time. In fact, in responding to the fire on Monterey, the guys had to cut through trees that had fallen over the road,” Briggs said.

In the end, though, Briggs and Danczyk both praised the work of their firefighters.

“It is a team effort and we will get through it,” Briggs said.

“Looking long term, I hope relief is not that far away,” Danczyk said. “I encourage the public to be patient. Most everyone has been sheltering in place and doing the things that city hall has asked them to do and we are very appreciative of that. We are almost to the end.”