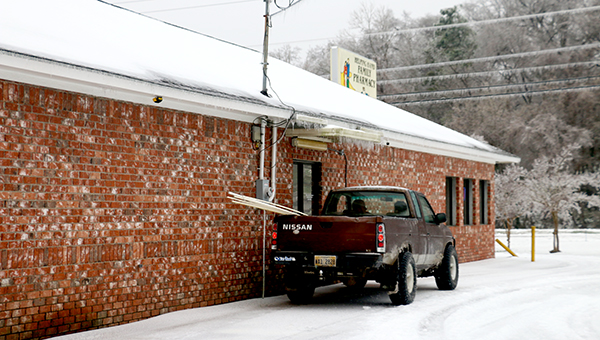 Both Helping Hand Family Pharmacy and Morgan’s Bestway opened their doors Wednesday, albeit with altered hours.

“We opened around 9 a.m. and had to close at 12:15 p.m. (Wednesday) because of the weather,” Helping Hand Family Pharmacy cashier Harley Nevels said.

Cynthia Morgan, who is the owner of Morgan’s Bestway, said they closed at 5 p.m. Wednesday so employees could get home safely. On Thursday they didn’t open until 9:30 a.m.

“Everybody lives far out and with trees down across the road, it took longer for everybody to get here,” Morgan said.

Nevels said four-wheel drive vehicles made it possible for her bosses and some of the other employees to come to work.

During their hours of operation, both Morgan and Nevels said business has been brisk.

“We were pretty steady (Wednesday) as far as people calling in. We had a lot of people come to the window,” Nevels said.

Morgan said Wednesday brought a wave of customers looking to stock up on staples that had been depleted after several days of being housebound.

“We had a big day Wednesday,” Morgan said. “We may have a little milk left, be we sold out of all the bread, all the rolls, the Hawaiian rolls, white bread — everything,” she said.

Morgan said they also sold out of Ramen noodles, but still have some gallon jugs of water left and ice.

And for those needing medication who cannot drive to the pharmacy because of the roads, Nevels said the Warren County Sheriff’s Department and the Vicksburg Police Department have been offering to pick up and deliver.

“We are going to be here to make sure everybody gets their medicine, but we don’t want anyone getting hurt either,” she said.

People’s Drug Store is also opening for those in need of their medication. The long-standing downtown Vicksburg pharmacy will be open Friday from 8 a.m. until 4 p.m. before returning to regular business hours Saturday.